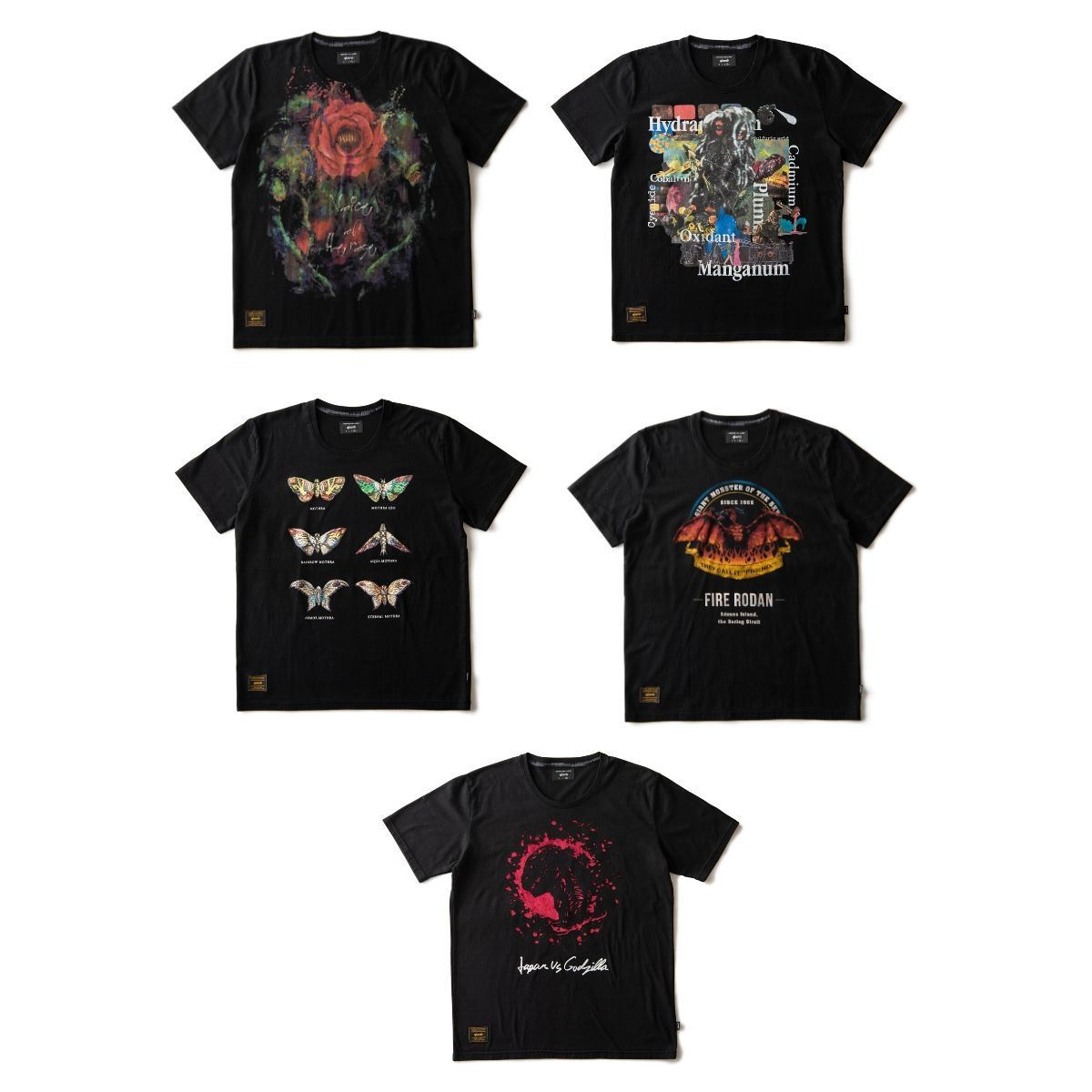 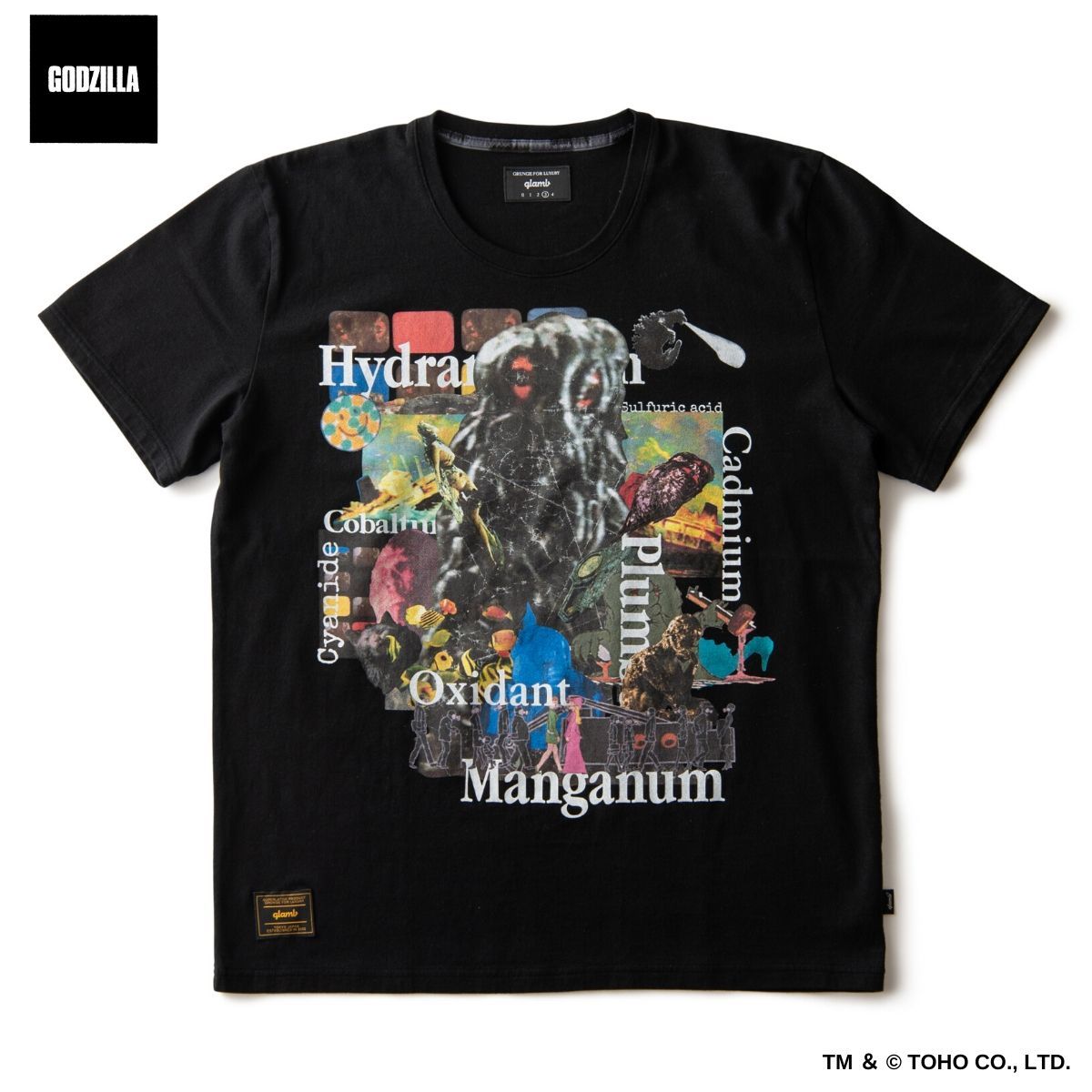 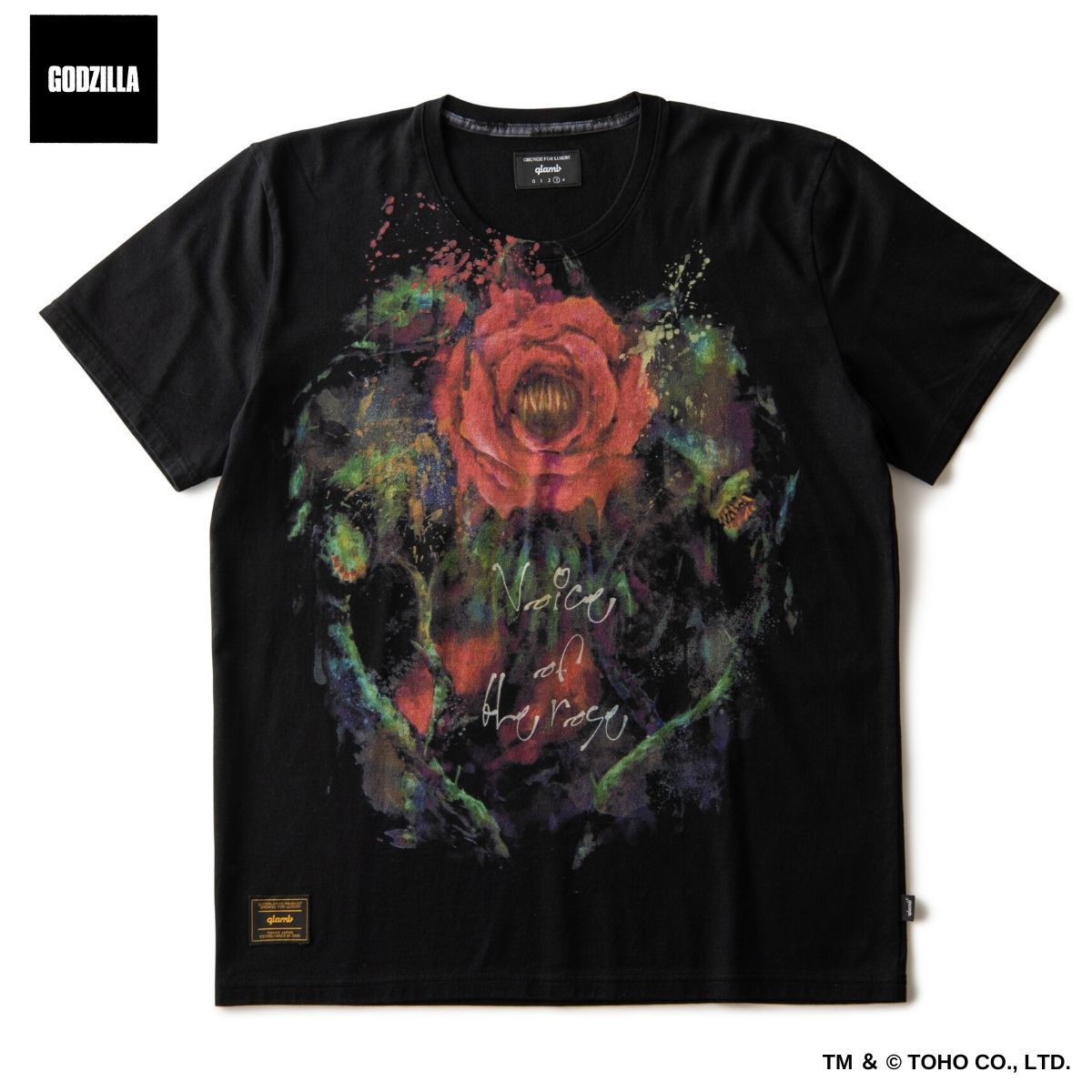 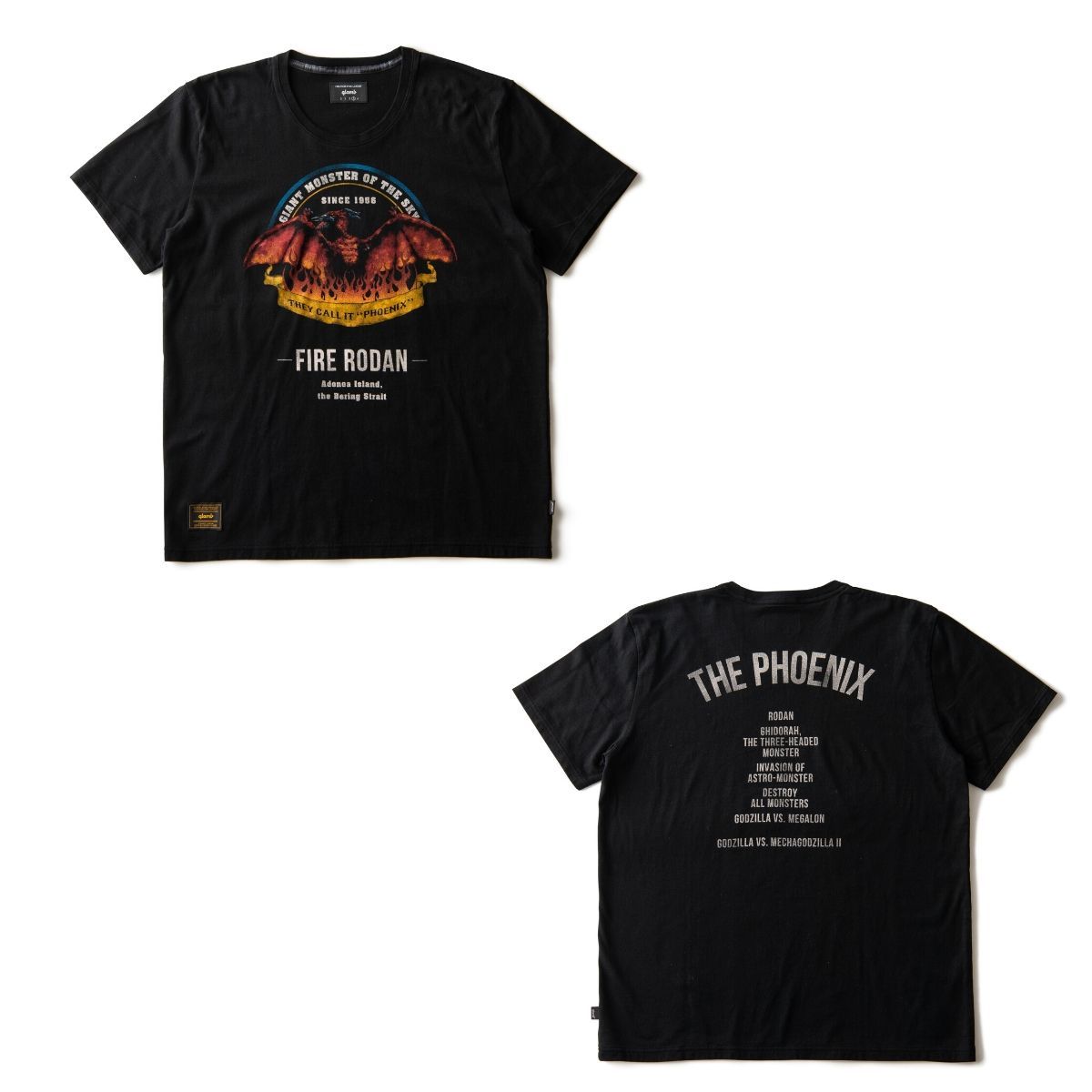 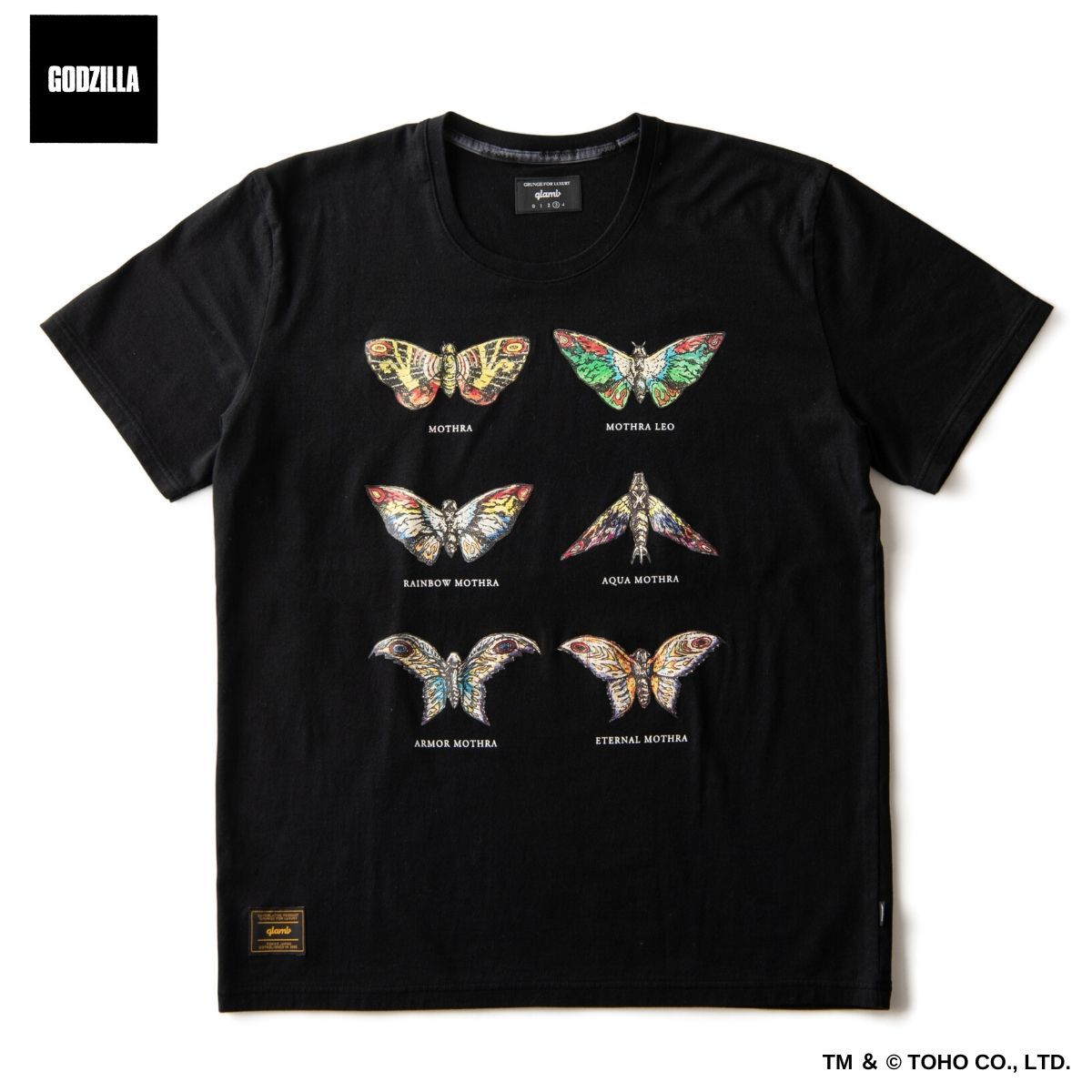 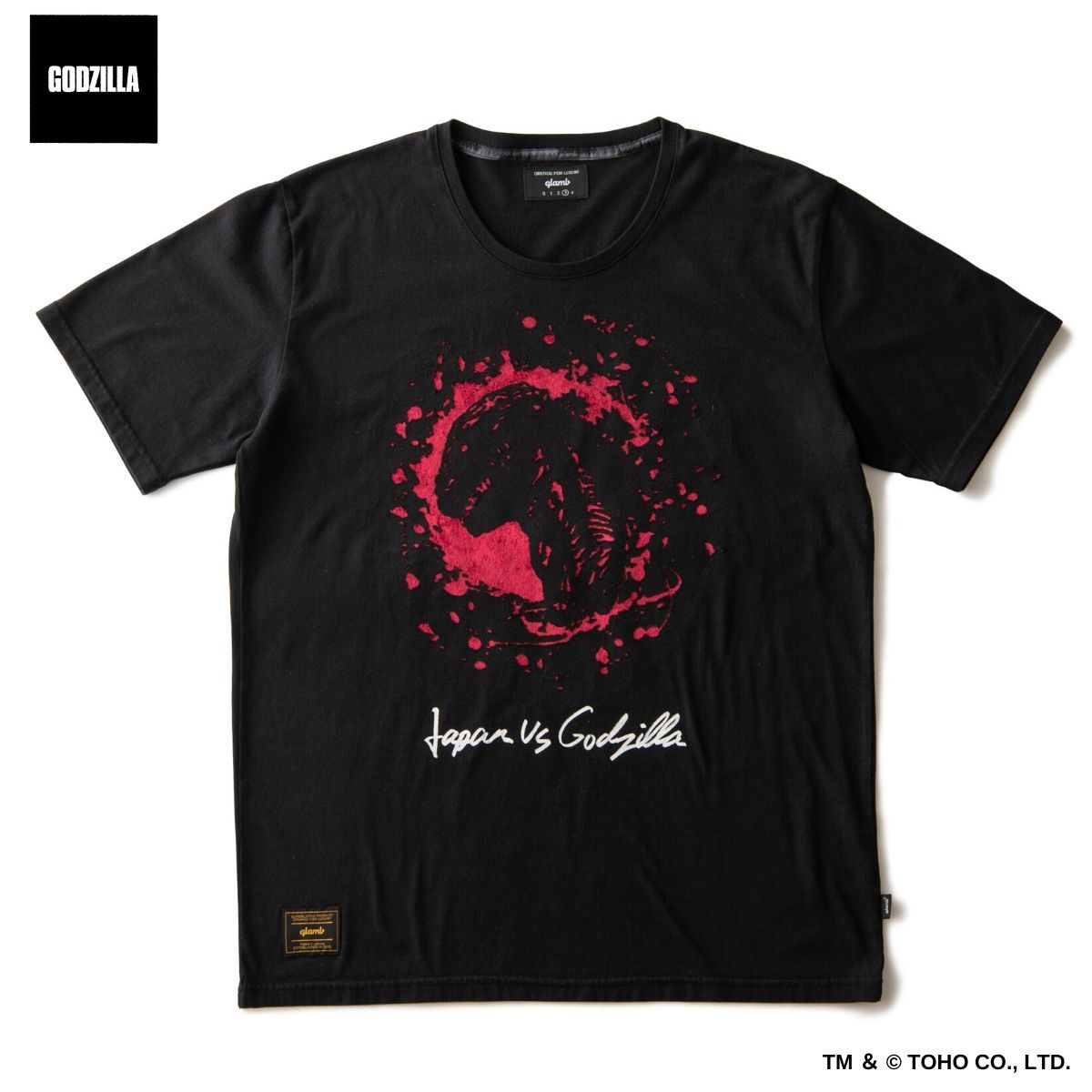 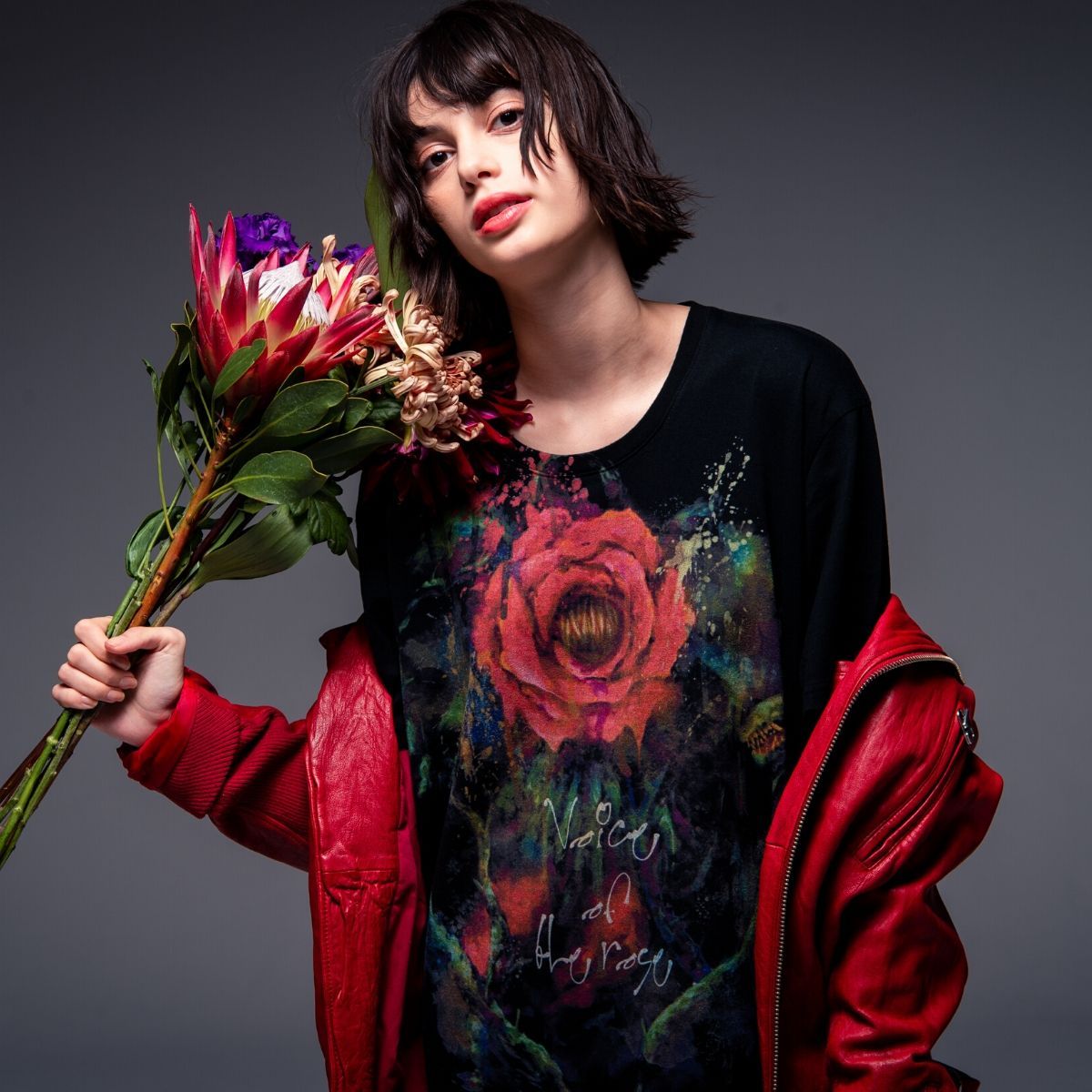 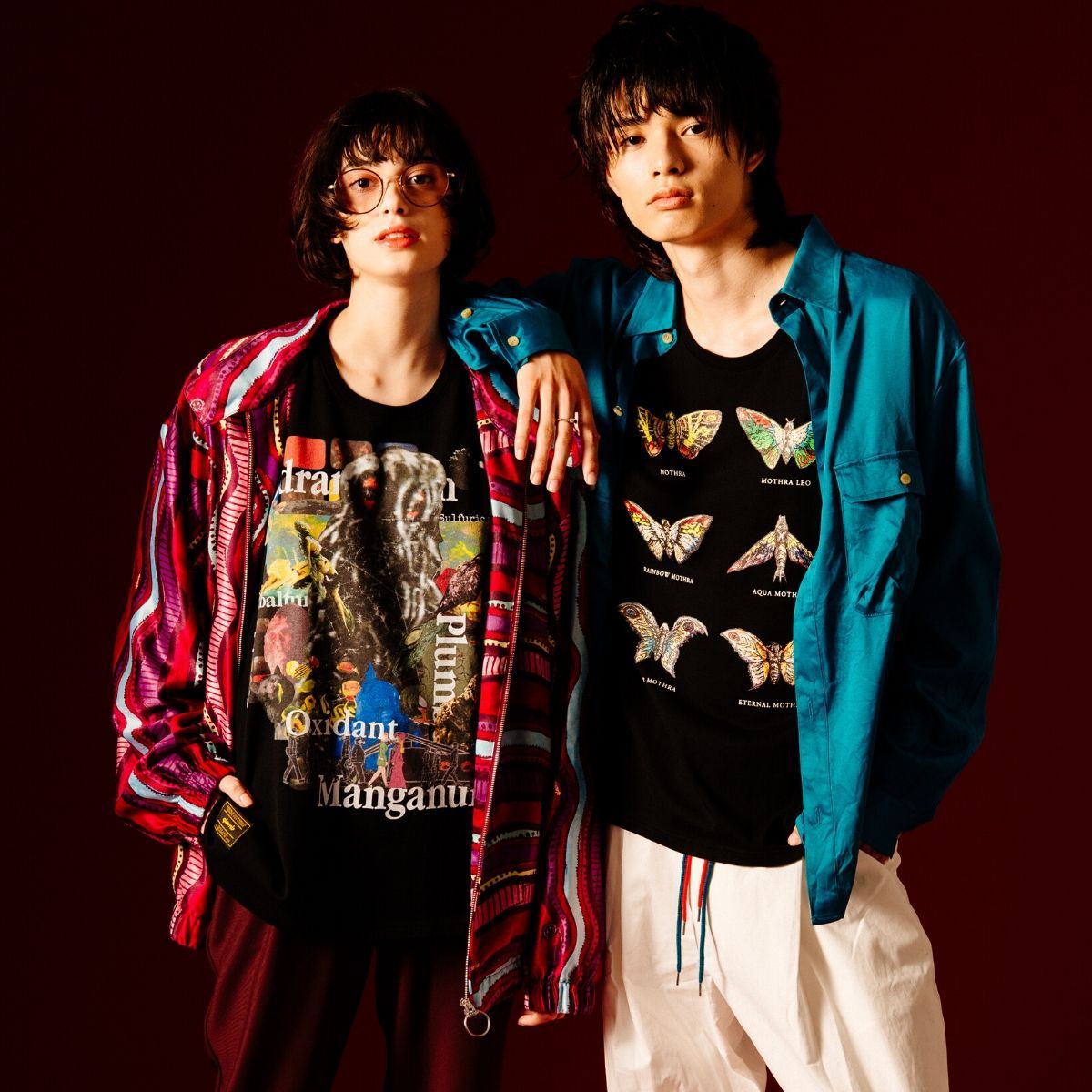 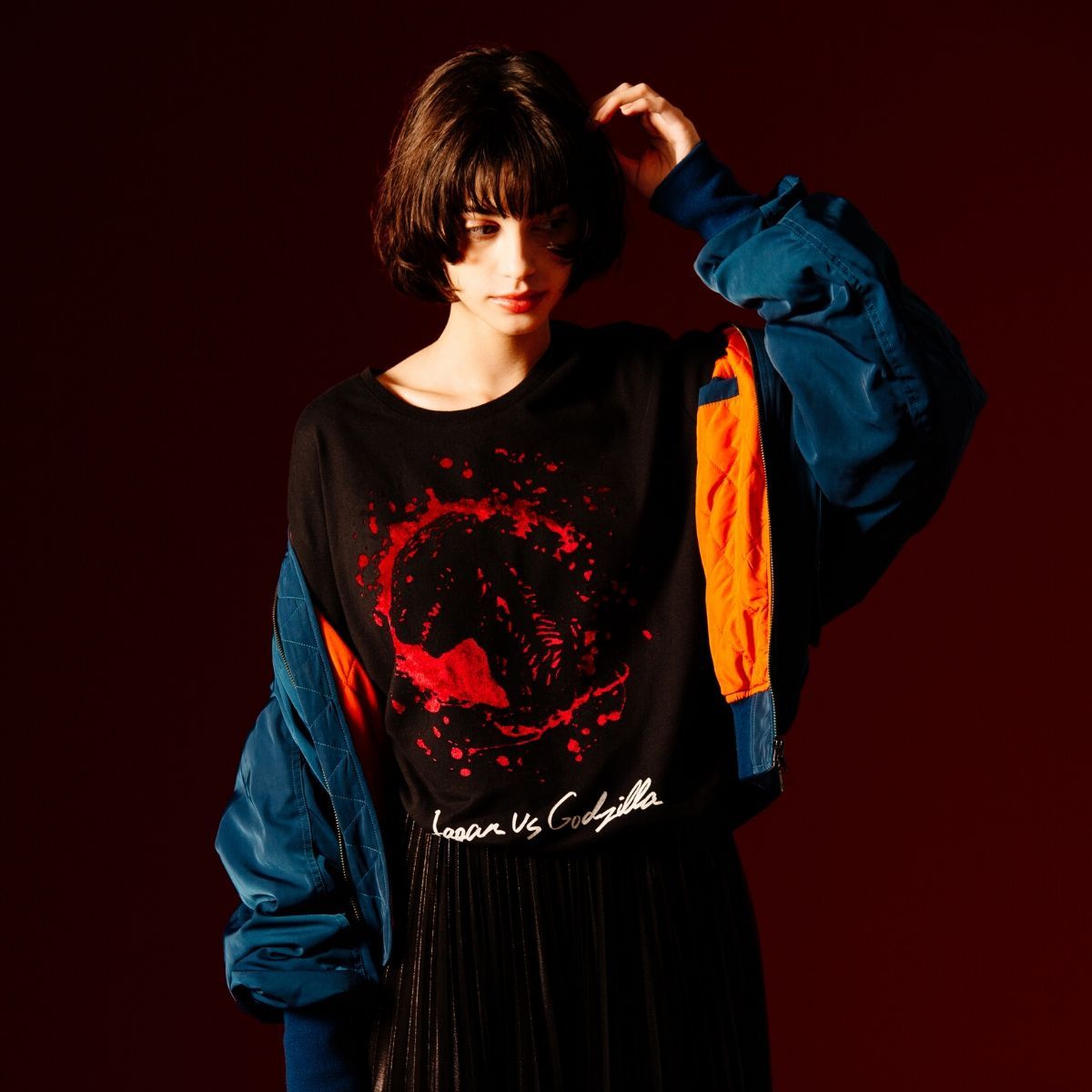 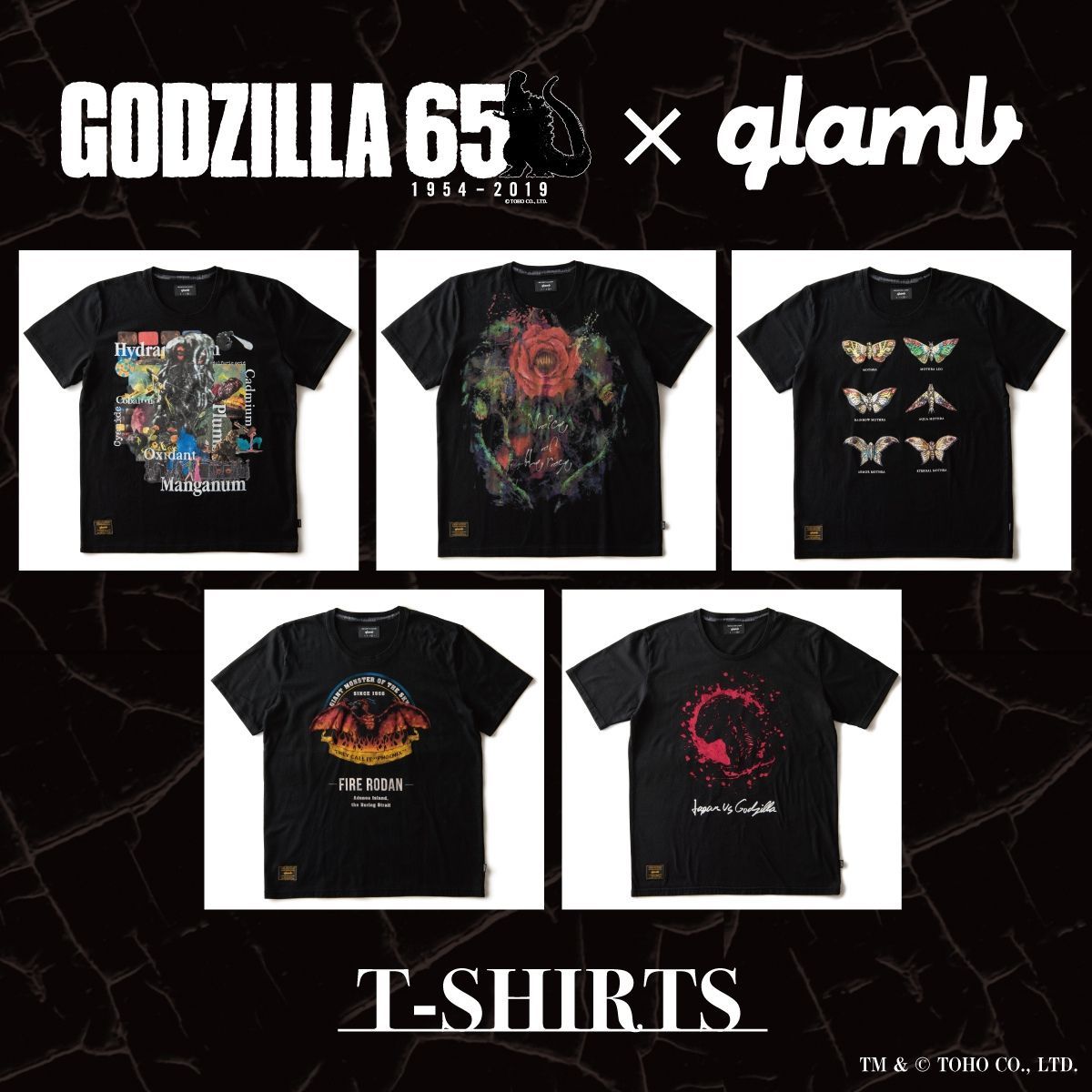 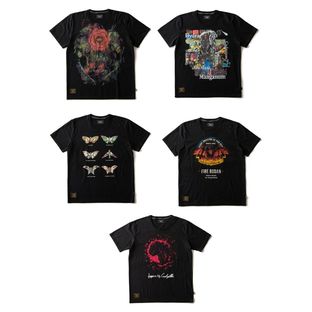 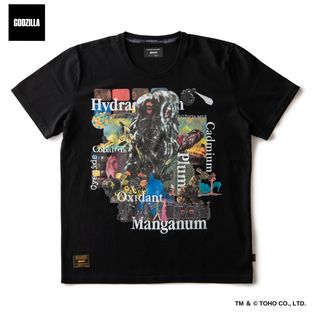 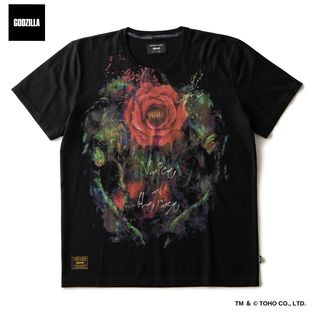 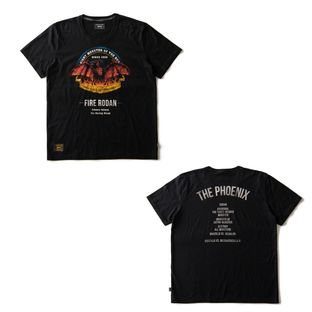 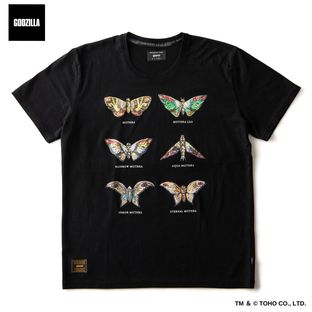 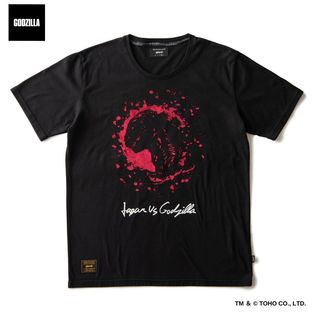 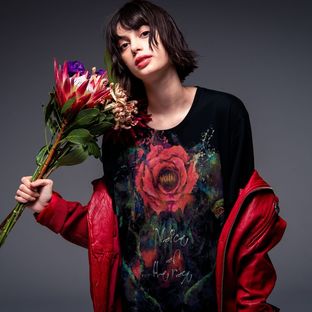 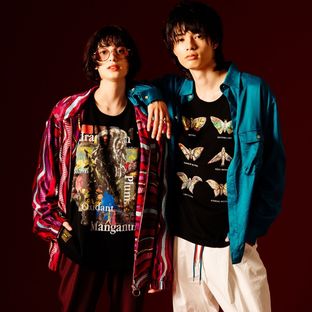 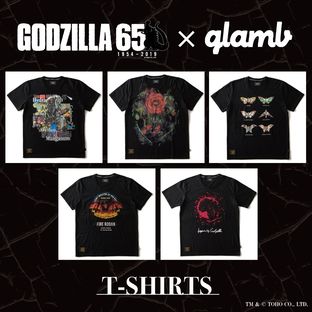 These T-shirts from the Godzilla X glamb collaboration are now available for pre-order.

[Biollante]
Mourning the violent loss of his beloved daughter Erika, Professor Shiragami combined her DNA with a rose, her favorite flower, and then spliced the combination with Godzilla's DNA to create the hybrid kaiju Biollante.
glamb has a history of producing many flower-based motifs, and its rendering of the flower-kaiju form of Biollante is a masterful work of graphic art.
With a vivid crimson rose positioned on the chest, the creature's otherworldly appearance is expressed with a haze that's produced with a dripping technique.
Written in cursive in the center of the design is the phrase "Voice of the rose" which is symbolic of the movie's story and brings the artwork together to form a single dramatic statement.
[Hedorah]
Hedorah is a kaiju whose motif is pollution, which was becoming a prominent social problem at the time of his first movie appearance in 1971. On this shirt, images from that movie are combined with various kitschy artwork to form a collage.
Latin and English names of chemical elements and compounds are randomly positioned in this motif that's reminiscent of 70s psychedelic culture.
A playful picture of Godzilla is inconspicuously included among the miscellaneous images, giving a feel for the wit of the brand.
[Rodan]
Second only to Godzilla in terms of his number of appearances, Rodan is a kaiju whose form changes depending on the series that he appears in.
This composition was created by taking the "Fire Rodan" form, which appeared in Godzilla vs. Mechagodzilla, and combining it with inspiration from motorcycle and skater culture.
Featured in the design are various text notations such as Rodan's overseas nickname of "PHOENIX" and his place of origin.
The back of the shirt is styled like a rock T-shirt, listing the titles of various movies that Rodan has appeared in.
[Mothra]
Mothra is one of the most popular kaiju in the Godzilla series, and the only one to always be depicted on the side of justice.
Using an arrangement often seen in contemporary art as a motif, six forms of Mothra are laid out on the front to show off the various patterns and colors of her wings.
Each form is identified and labeled with names like "RAINBOW MOTHRA" and "AQUA MOTHRA" in an elegant font.
Enjoy this streetwear that depicts the history of how Mothra changed her form to gain new abilities and defeat her fearsome enemies.
[Shin Godzilla]
Using the opal processing technique that's glamb's specialty, Godzilla is depicted as the "Giant Unknown Creature" of Shin Godzilla on this shirt.
The backside of the front material was bonded with crushed velour, and an opal liquid for melting only the cotton was then applied over a plate that's cut out in the form of the graphic, revealing the pattern of the velour beneath.
The result is a stunning street-art rendering of the fourth form of Godzilla.