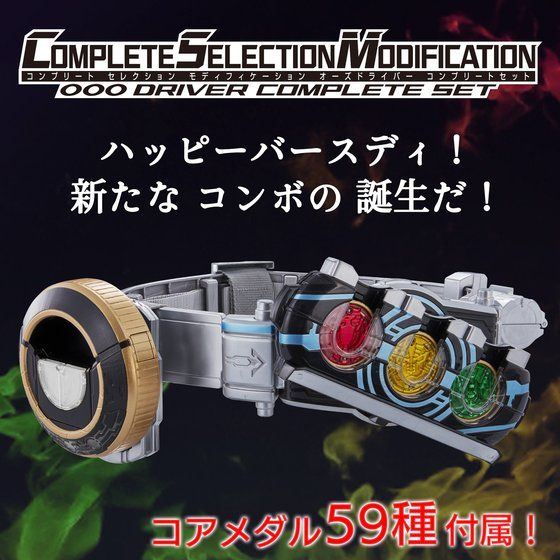 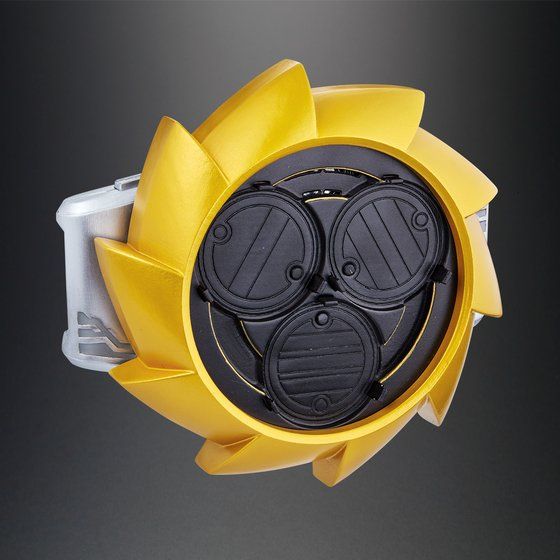 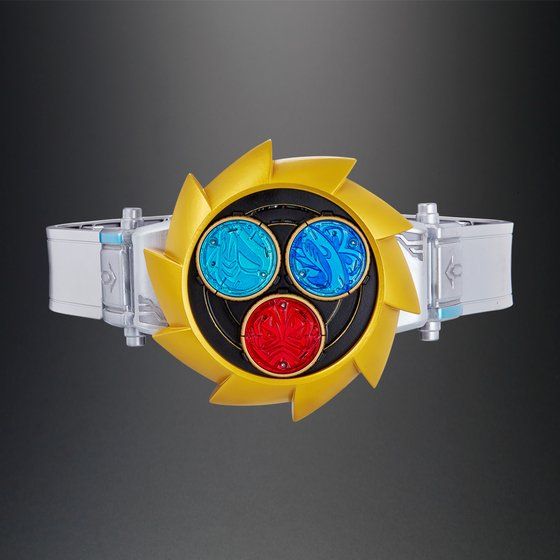 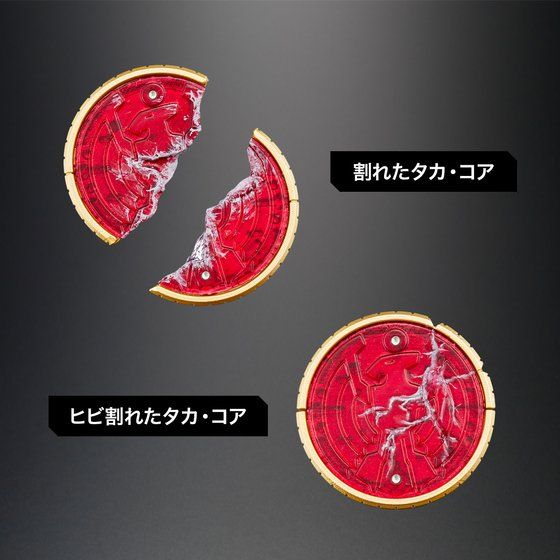 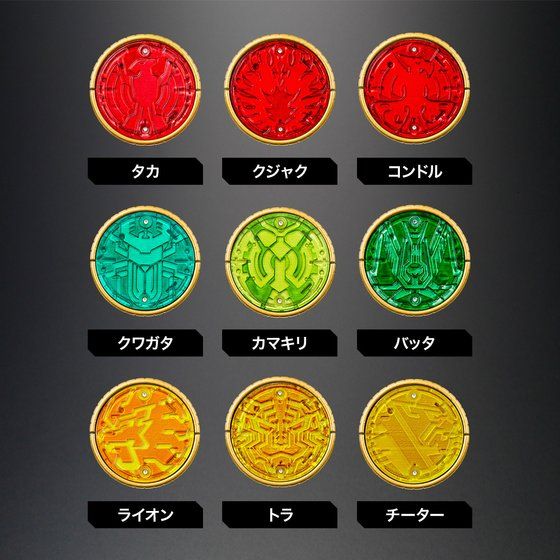 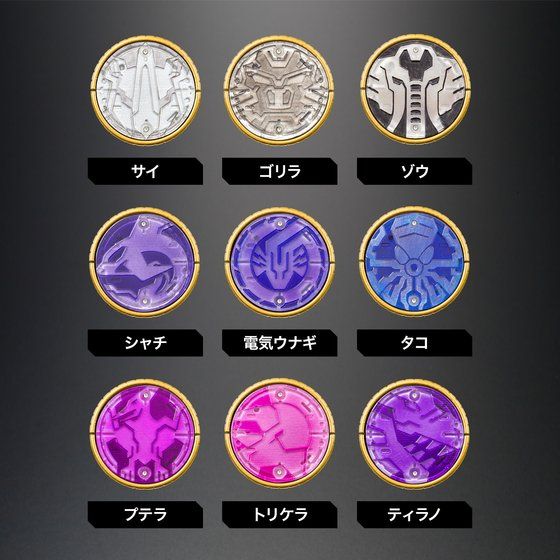 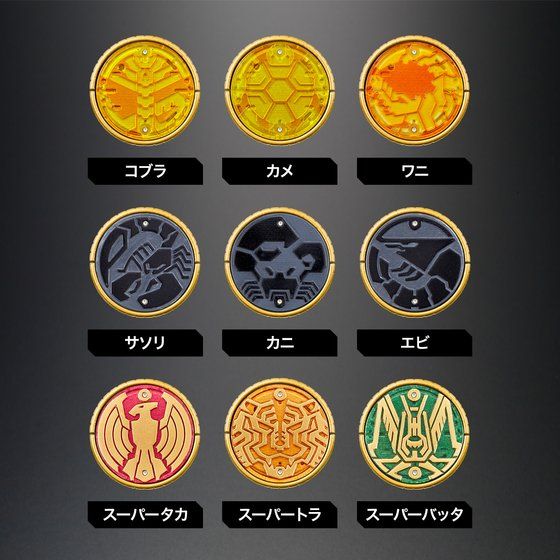 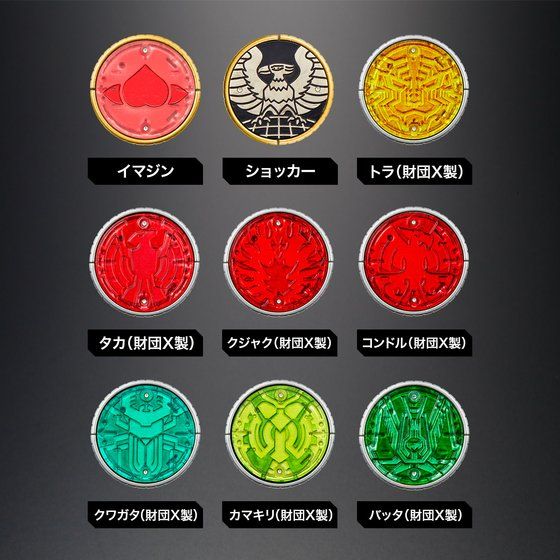 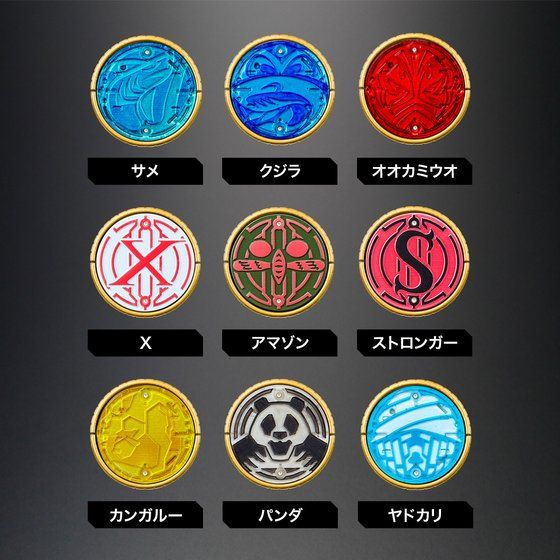 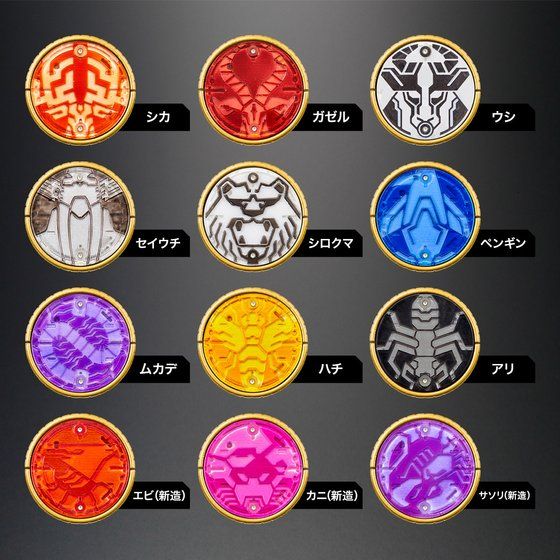 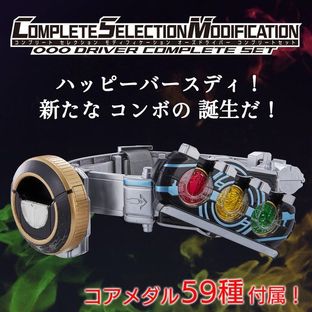 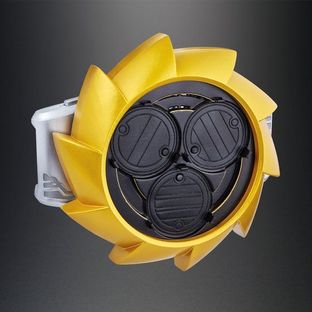 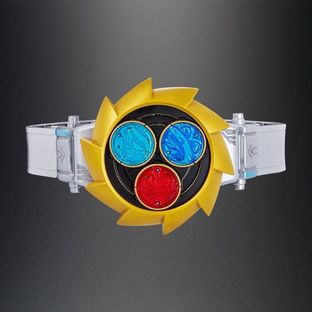 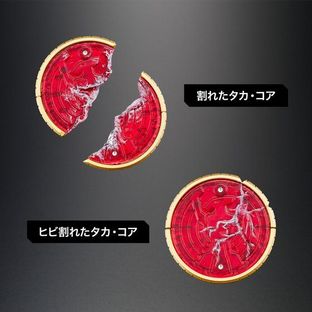 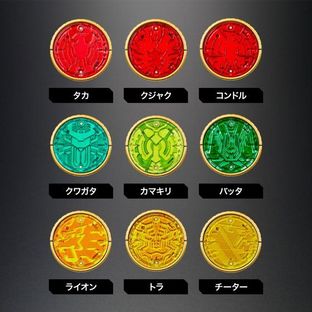 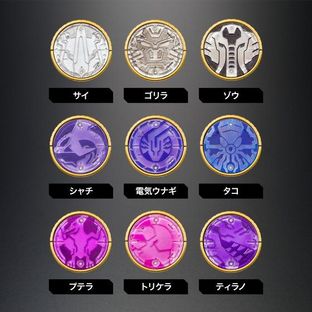 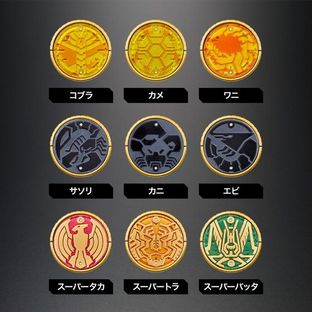 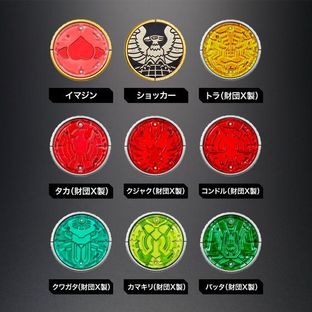 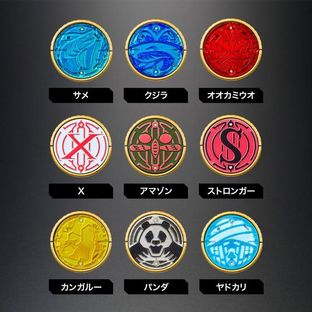 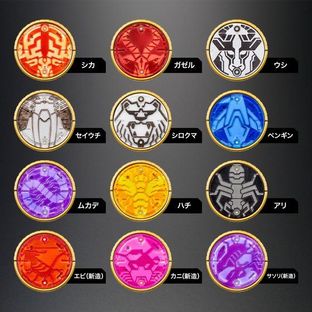 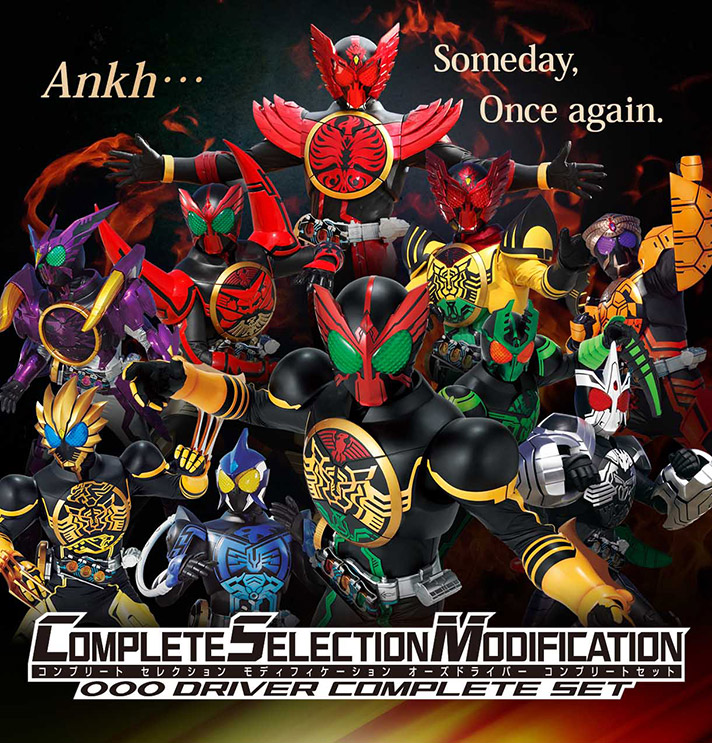 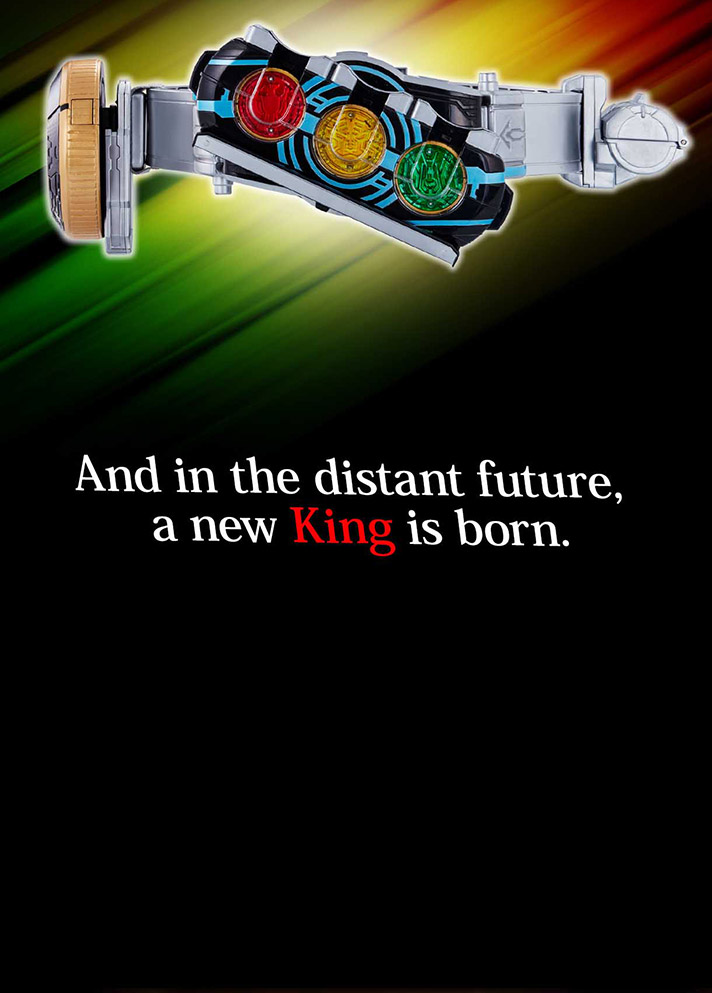 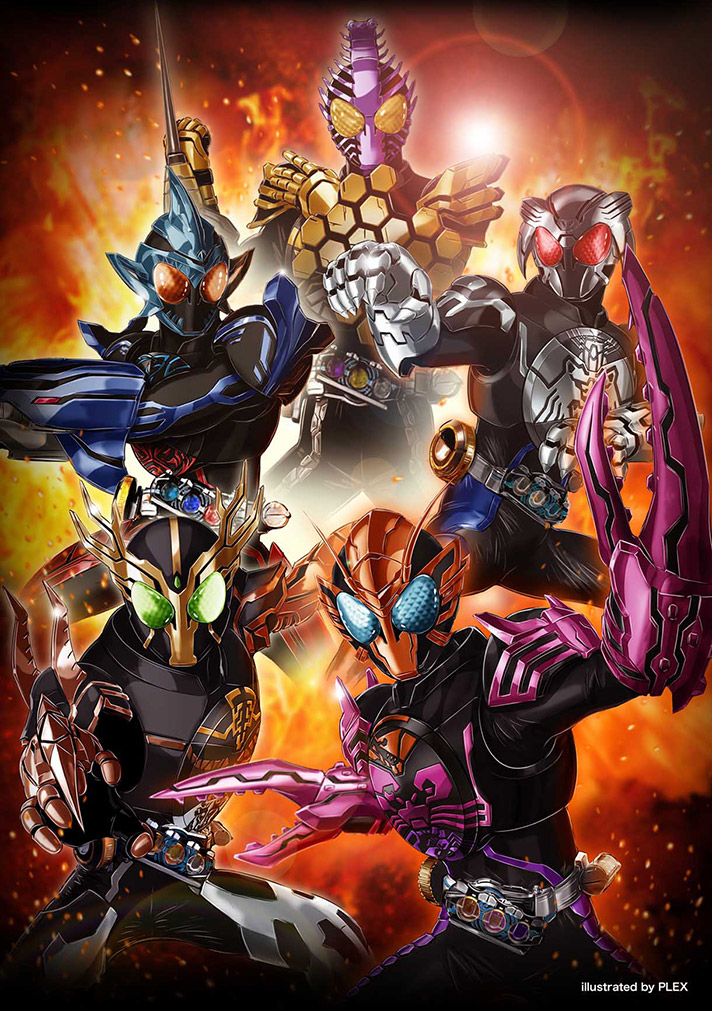 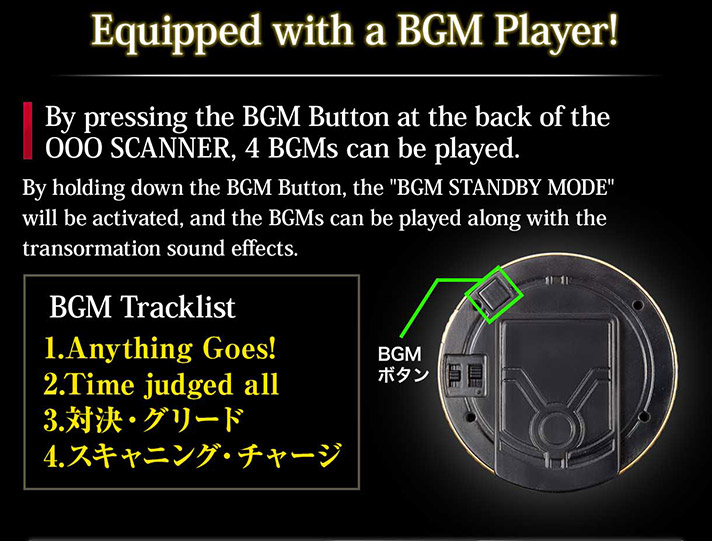 Presenting a transformation belt for adults, the 'OOO Driver' in 'Kamen Rider OOO'!
The full set includes all 59 types of 'Core Medals' that had never been made into products!

Also, the 'Core Medals created in the future' which had only appeared as image data in the 2011 movie 'Kamen Rider × Kamen Rider Fourze & OOO: Movie War Mega Max' are made into products for the first time. These Medals can trigger transformations into new Combos (5 types), of which the Hero images are newly created and the transformation songs (songs by Akira Kushida) newly recorded as well.

＜OOO Driver & O Medals＞
All 59 types of Core Medals, which were not included even in the items 'O MEDAL SET' series and 'PREMIUM O MEDAL COLLECTION' sold during the TV broadcast, are now made into products.

The transformation sound effects of Combos (combinations of Medals) that were not available in the transformation belt 'DX OOO Driver', such as the 'Super Tatoba (Hawk, Tiger & Grasshopper) Combo' and the 'Tamashii Combo', are now recorded. By scanning the cracked TAKA (Hawk), KUJAKU (Peacock) & CONDOR, the sound effect of Ankh's Tajadol Combo transformation in the final episode can be activated.

Furthermore, the 'Core Medals created in the future' which had appeared as image data in the 2011 movie 'Kamen Rider × Kamen Rider Fourze & OOO: Movie War Mega Max' are made into products for the first time. With the assistance from TOEI's Producer Naomi Takebe (Producer of 'Kamen Rider OOO'), 5 new Combos which include the Shigazeshi Combo (Deer, Gazelle & Bull) and the Seishirogin Combo (Walrus, Polar Bear & Penguin) are born.

The tranformation sound effects of the new Combos are freshly recorded by the creator of OOO Driver sound effects in the drama, Akira Kushida. Details about the newly created Core Medals with original designs and the new OOO Combos are released in the attached booklet.

Moreover, the set comes with the 'silver-edged Core Medals' created by Foundation X which had appeared in the movie 'Kamen Rider Heisei Generations FINAL: Build & Ex-Aid with Legend Riders', released on 9 Dec 2017.

＜Dialogues Recorded＞
Dialogues of the protagonist Eiji Hino and his partner Ankh are largely compiled. By pressing the Dialogue Button on the 'OOO Scanner', a variety of dialogues such as '映司！これ使え！(Ankh)' and 'アンク。行くよ！(映司)' will be played.

By selecting the 'Buddy Voice Mode' with the switch at the back of the 'OOO Scanner', dialogues of Eiji and Ankh will be played after the transformation and finishing move sound effects. The captivating transformation scenes in the drama can then be recreated when scanning the Medals.

On the other hand, by selecting the 'Ankh Navigate Mode', Ankh's instructions such as '映司！次はこいつに変身しろ。クワガタ・クジャク・チーターだ！' will be randomly played, which you can follow to experience the fun of transforming and changing between Combos.

＜BGM＞
By pressing the 'BGM Button' at the back of the OOO Scanner, 4 BGMs can be played. They include: the theme song 'Anything Goes!', battle BGM '対決・グリード', 'スキャニング・チャージ' and the insert song of the Tajadol Combo 'Time judged all'.