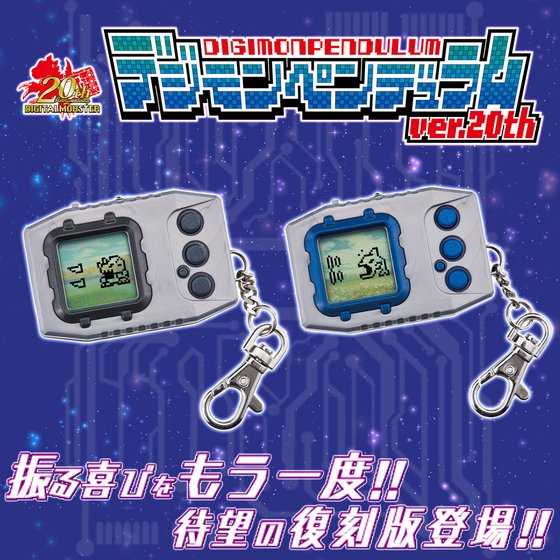 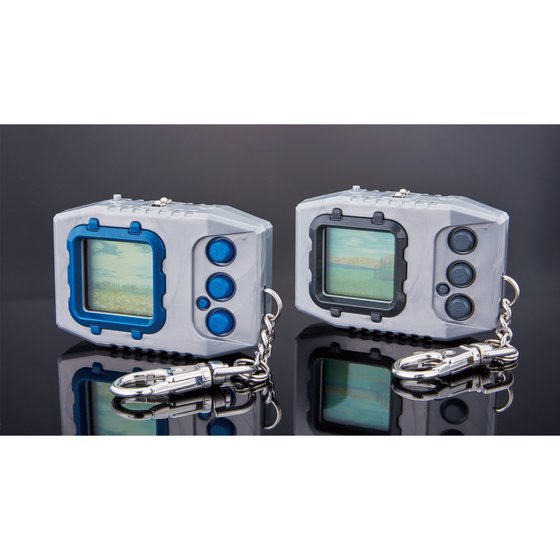 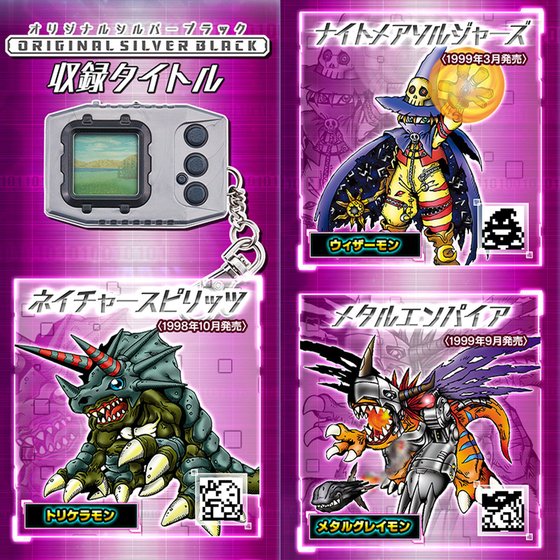 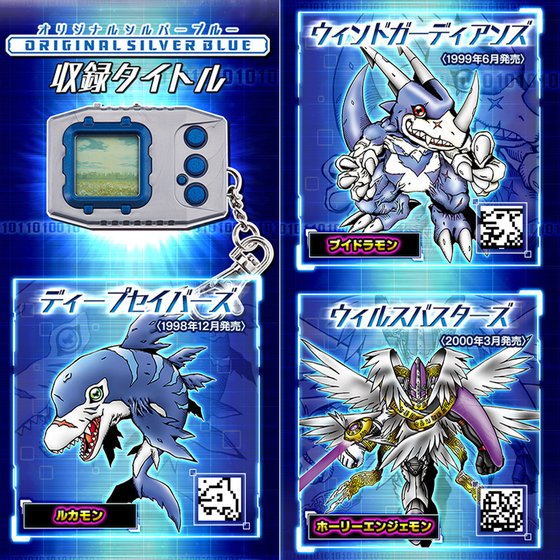 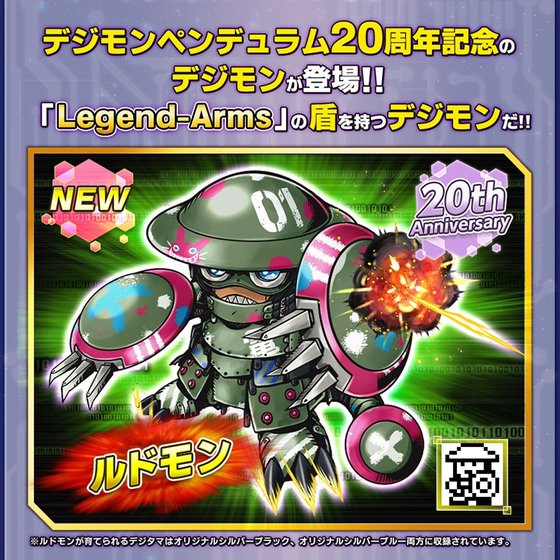 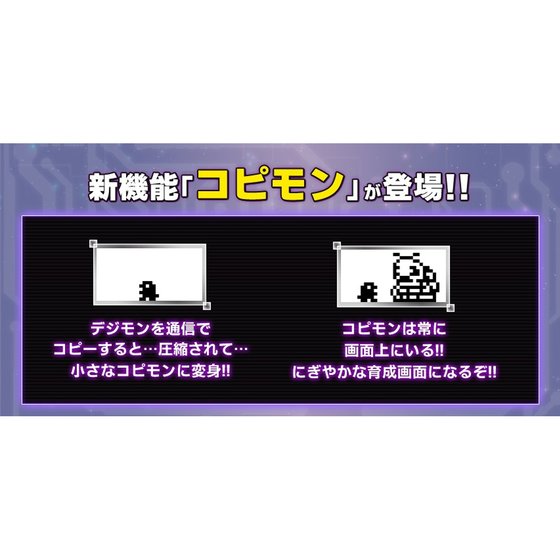 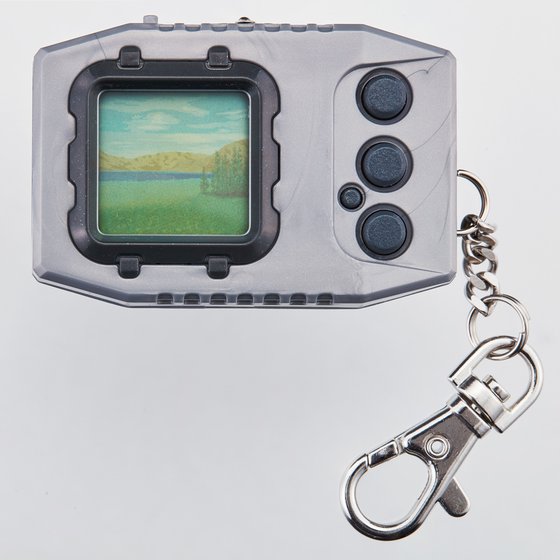 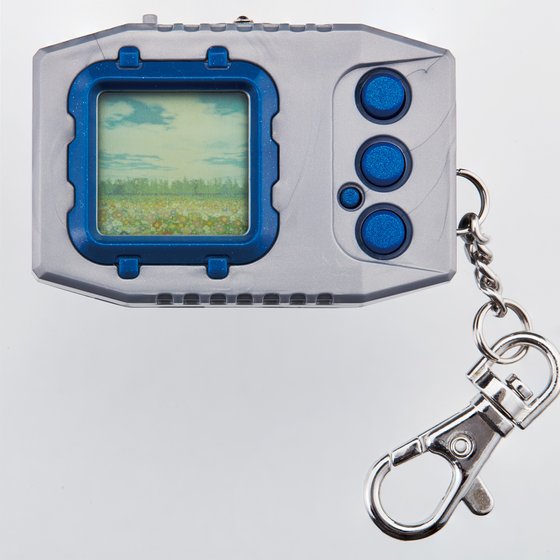 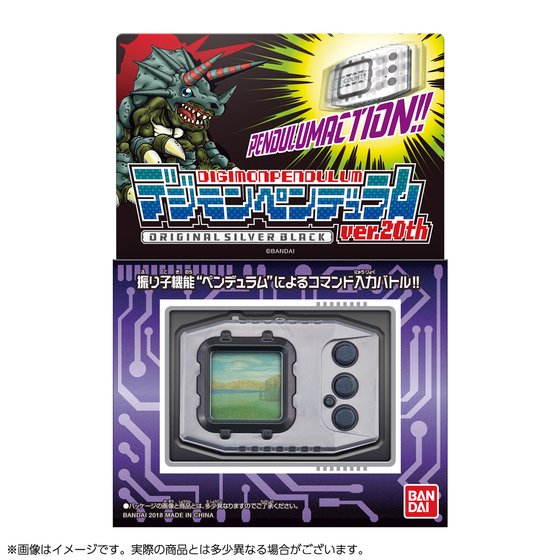 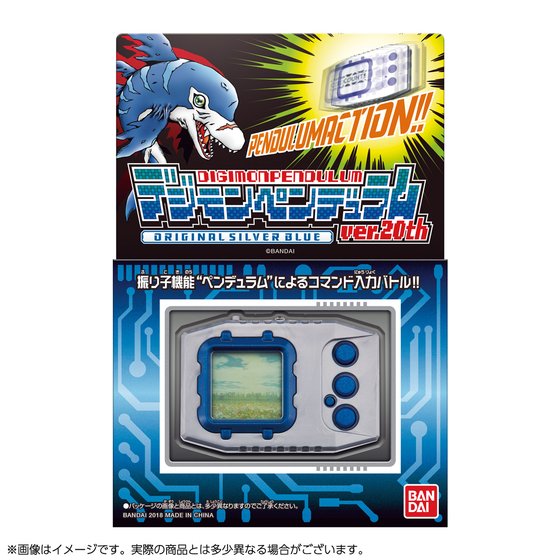 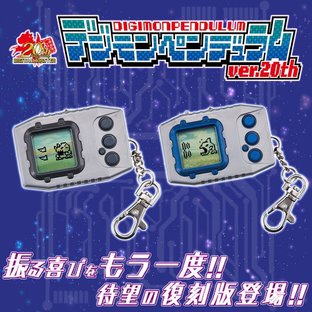 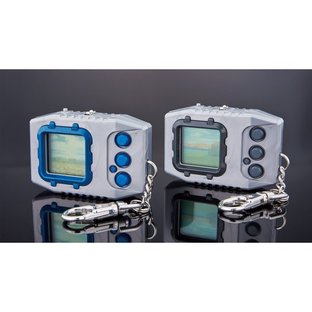 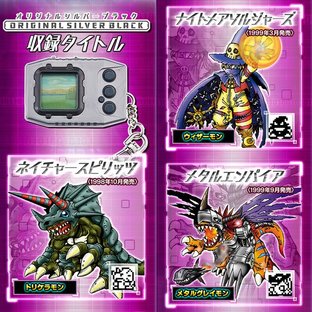 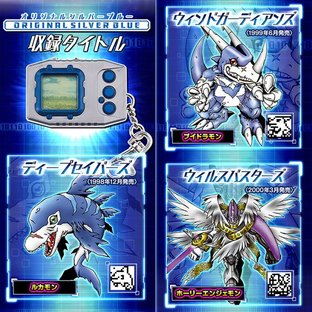 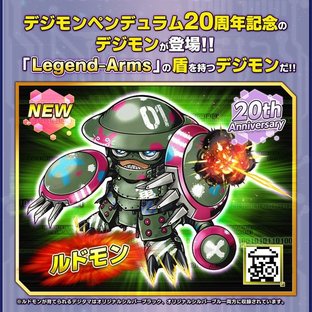 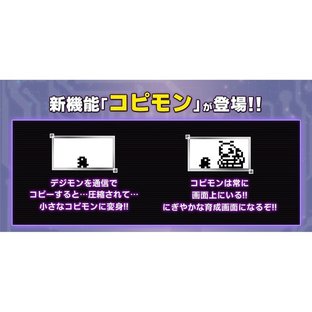 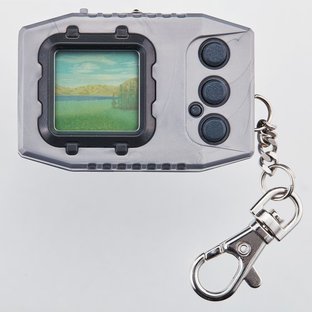 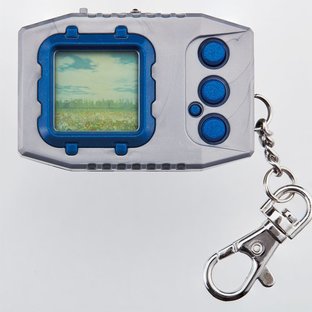 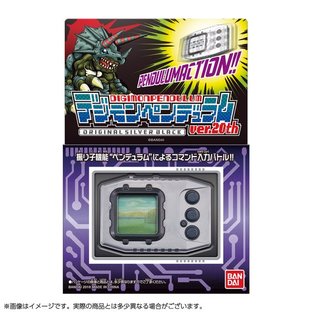 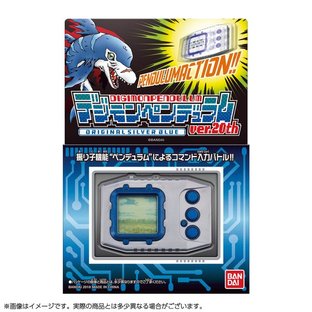 ■ Product Features
Following the introduction of the first generation 'Digital Monster' series in Aug 1998, the big hit virtual pet device equipped with a pendulum 'DIGIMONPENDULUM' was launched and is reaching its 20th anniversary in 2018. To celebrate the anniversary, we are launching a reproduction coming in 2 different colour versions, 'ORIGINAL SILVER BLACK' and 'ORIGINAL SILVER BLUE'.

【Digimons available】
Among the 6 titles of 'DIGIMONPENDULUM' previously released, the Digimons and rare DIGITAMAs featured in 3 of them are included in each colour version respectively (ORIGINAL SILVER BLACK includes 'NATURE SPIRITS', 'NIGHTMARE SOLDIERS' and 'METAL EMPIRE'; ORIGINAL SILVER BLUE includes 'DEEP SAVERS', 'WIND GUARDIANS' and 'VIRUS BUSTERS'). A total of more than 200 types of Digimons can be raised with the 2 different colour versions. In addition, 'Rare DIGITAMAs' will appear upon satisfying certain requirements such as 'number of wins in Battle Mode' and 'number of Album entries'.

Moreover, the DIGIMONPENDULUM 20th anniversary Digimon 'ルドモン' makes its appearance. 'ルドモン' is a Digimon with the shield of 'Legend-Arms', and the rare DIGITAMA that can hatch a 'ルドモン' is included in both colour versions 'ORIGINAL SILVER BLACK' and 'ORIGINAL SILVER BLUE'.

【Growing up & Transforming】
"Shake and train your Digimon by using the 'Pendulum' function. Different number of shakes will result in different training results."
Similar to the 'Digital Monster ver. 20th' introduced in 2017, it is possible to raise 2 Digimons at the same time, and the growing speed has been greatly enhanced. Needless to say, the 'JOGRES' function is also equipped. You can get the strongest Digimons by performing the 'JOGRES', for example combining 'WARGREYMON' and 'METALGARURUMON' to Digivolve into 'OMEGAMON'. The 2 different colour versions include a total of more than 10 types of Digimon resulting from JOGRES evolution.

【Transmission & Battle】
The Copy function available since 'Digital Monster ver. 20th' is strengthened. Through transmission with a fellow 'DIGIMONPENDULUM ver. 20th' player, you can copy a Digimon and the Digimon becomes a 'COPYMON'. 'COPYMON' is always visible on the screen and creates a lively scene for you to enjoy.

※Digimons cannot be sent from a 'Pendulum ver. 20th' to a 'Digital Monster ver. 20th'.

During a transmission battle, a Digimon's attacking power varies with the number of shakes of the device. It is also possible to choose COPYMON for the battle, and COPYMON will turn back to its original form when attacking.

※Please refer to the product order page for updates and details.
※Order may close if upper limit is reached.
※It is possible that pre-orders have ended when accessing this page.
※Product specifications may be changed without prior notice.
※Product shots shown in this page are based on developing samples. Actual product may vary from sample photos. 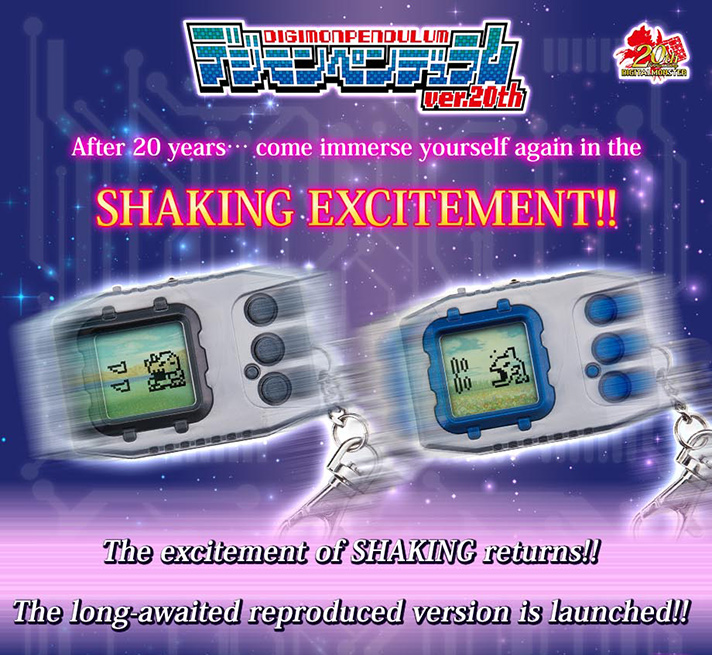 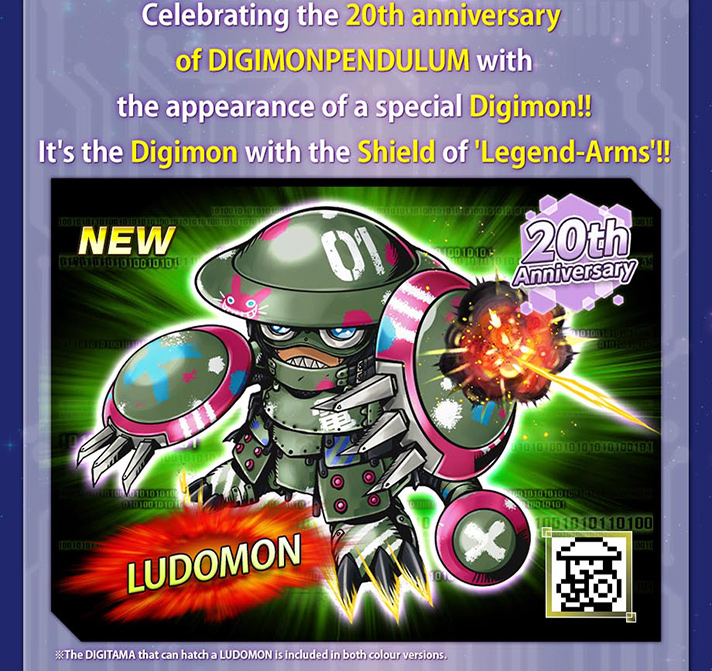 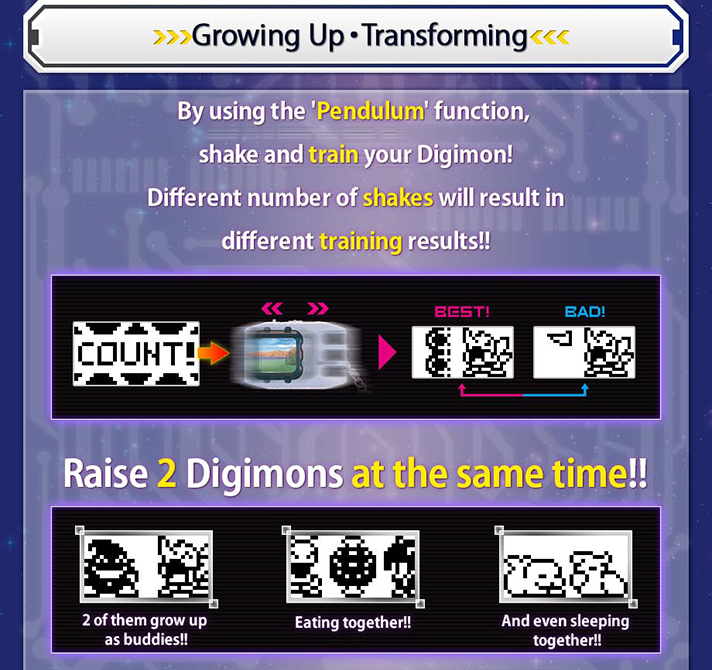 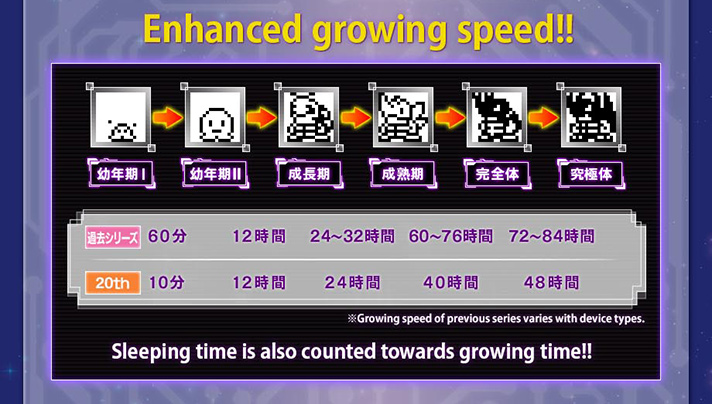 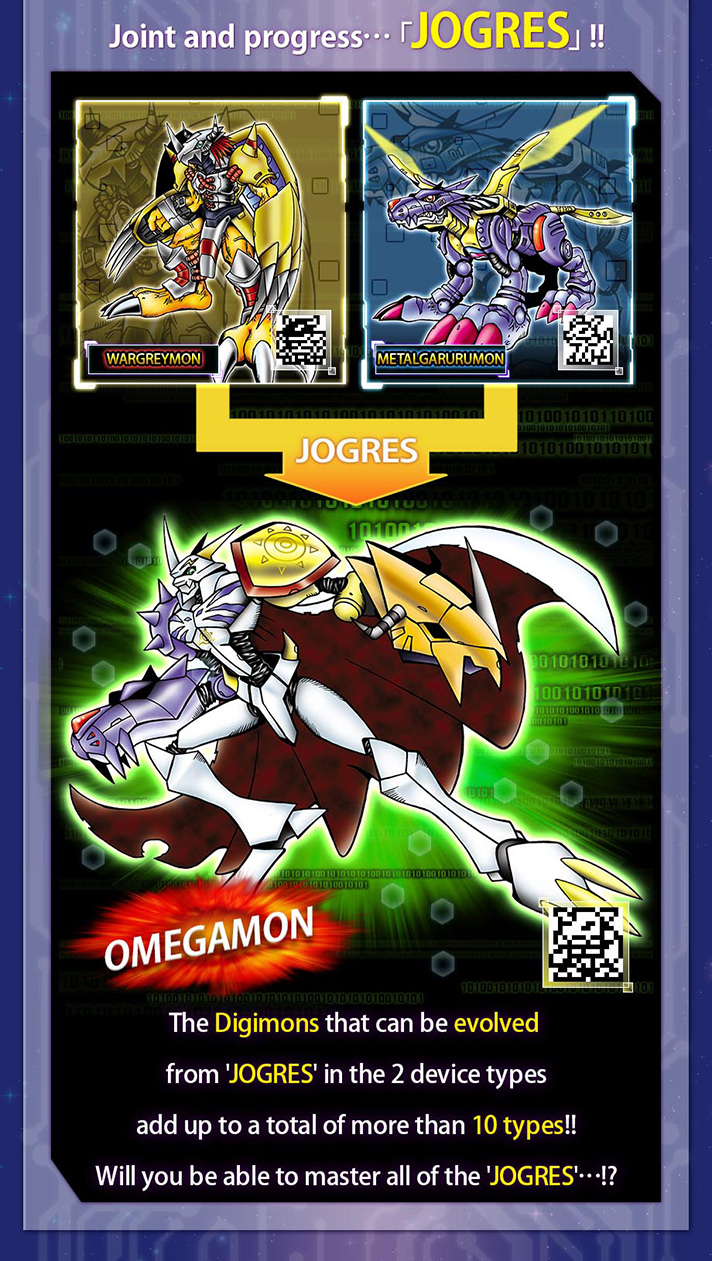 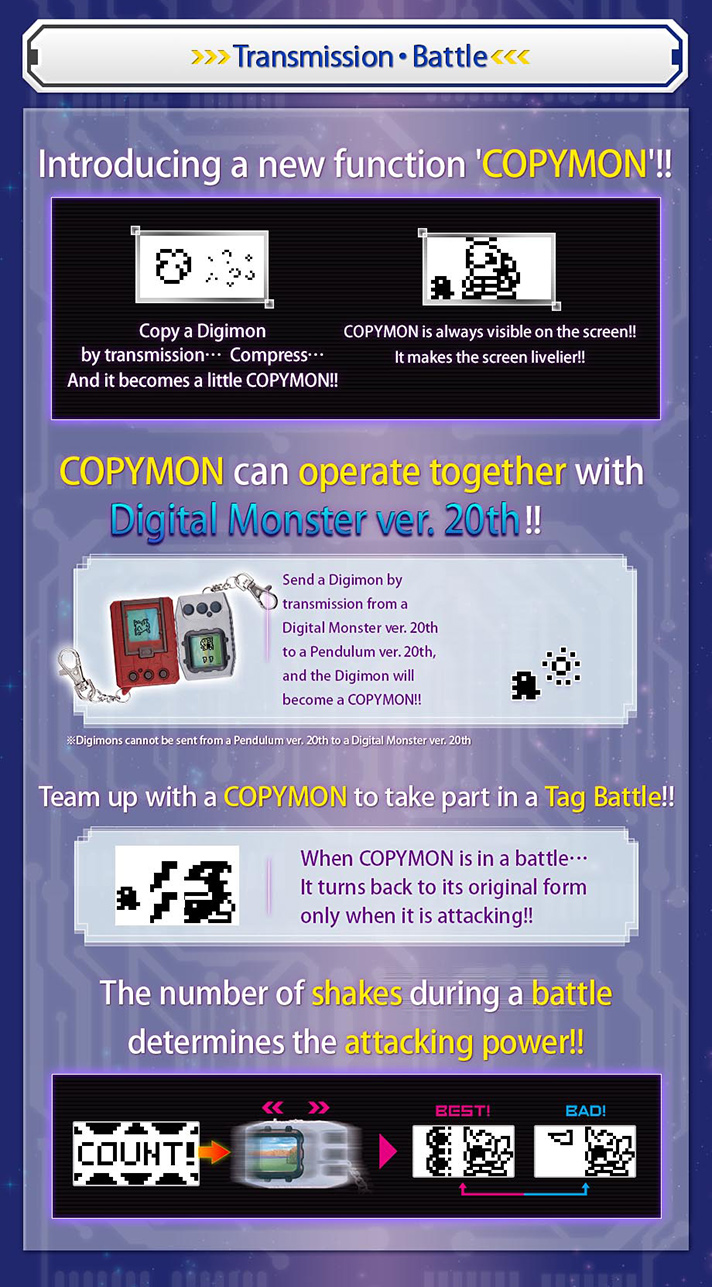 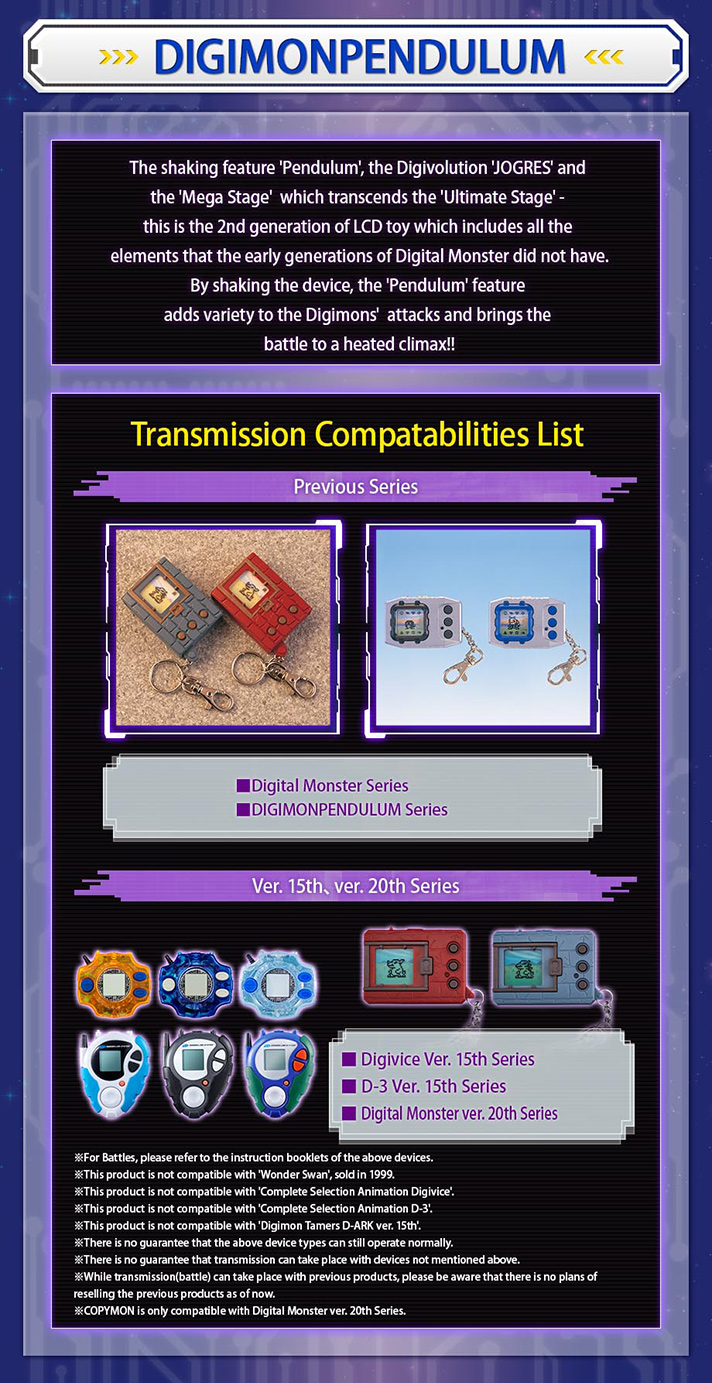