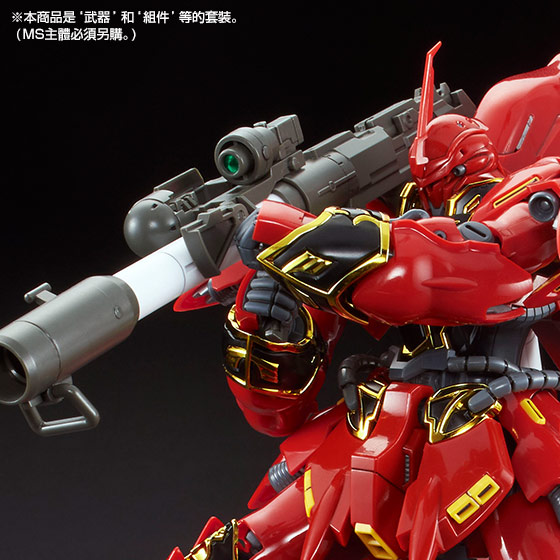 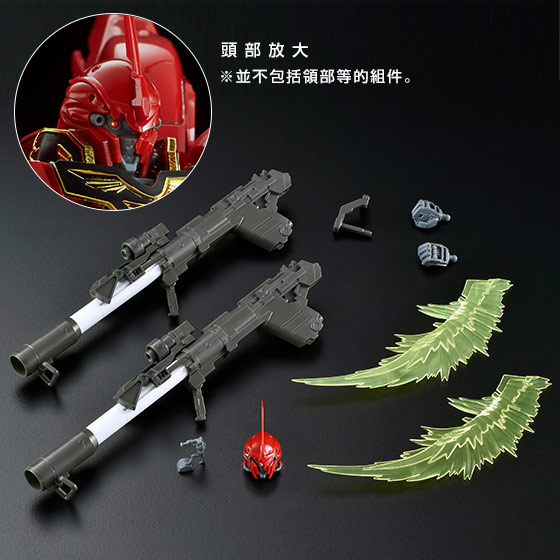 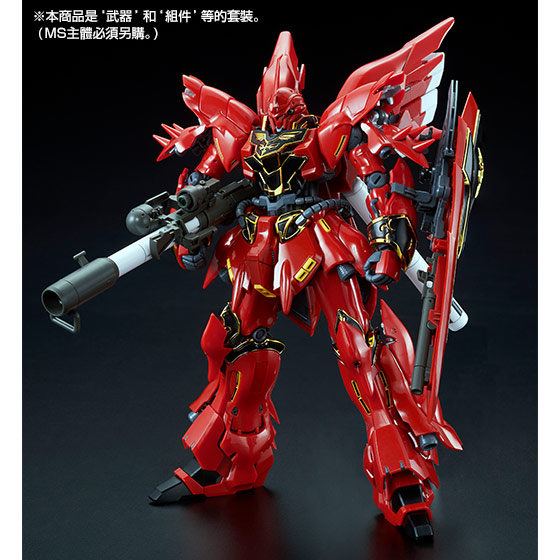 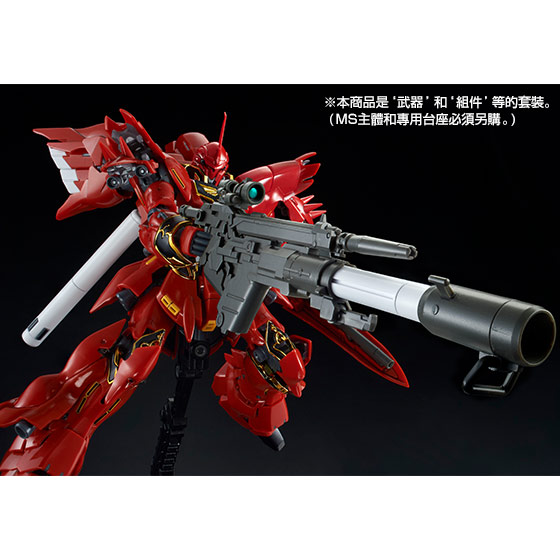 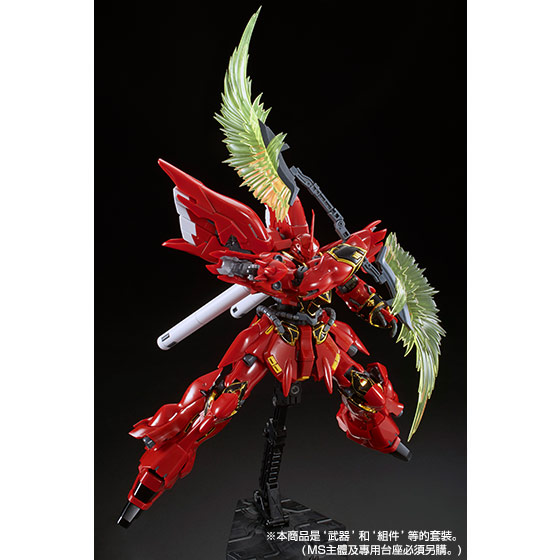 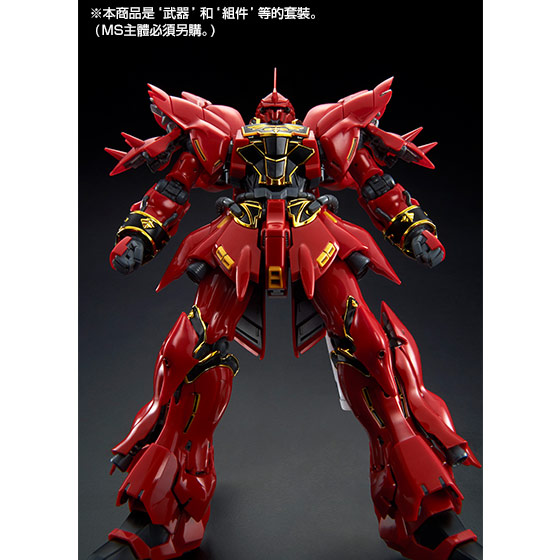 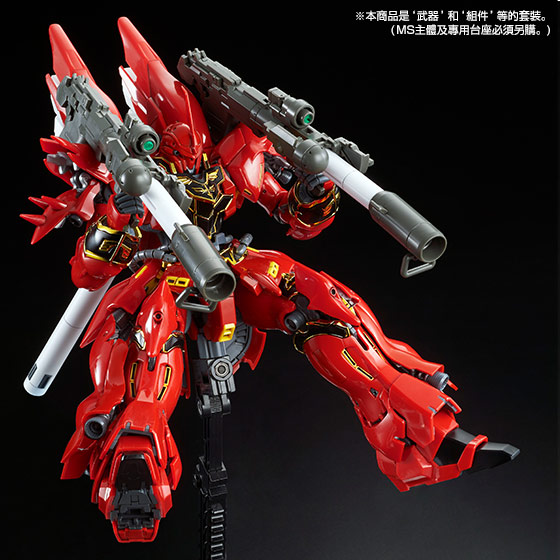 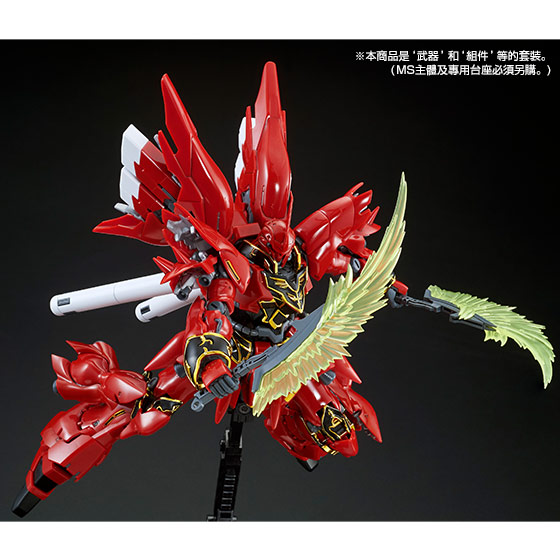 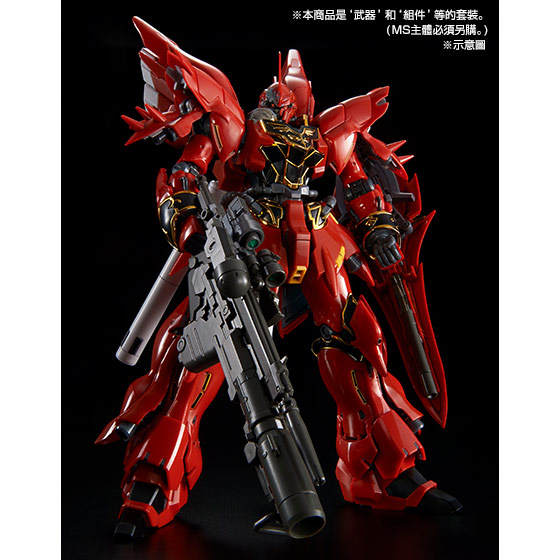 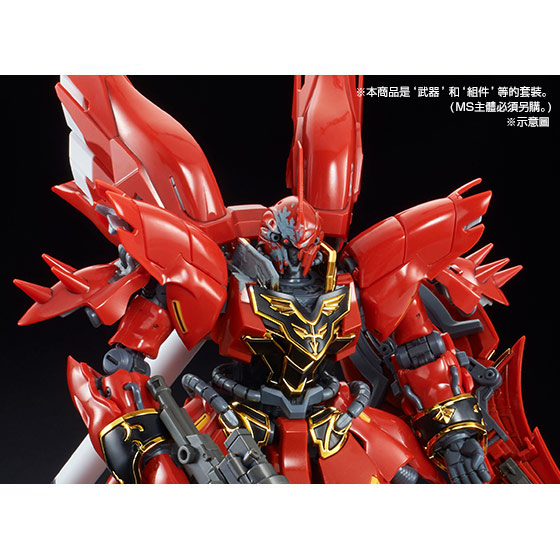 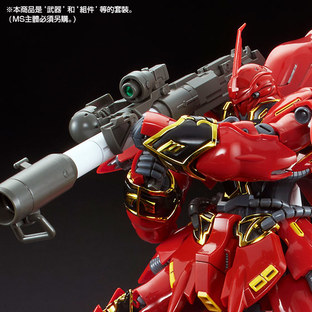 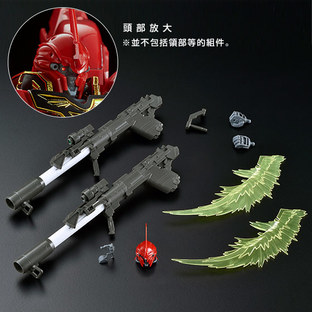 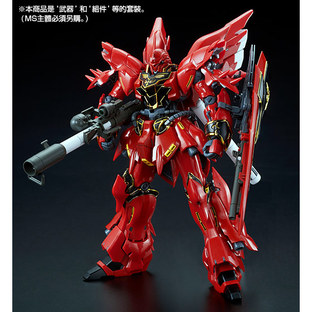 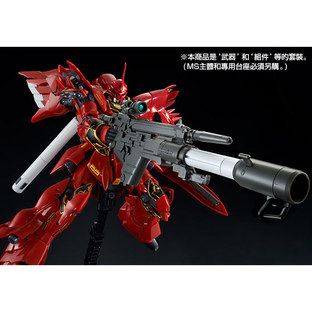 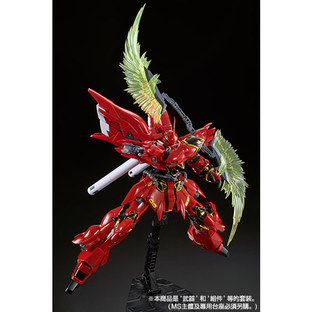 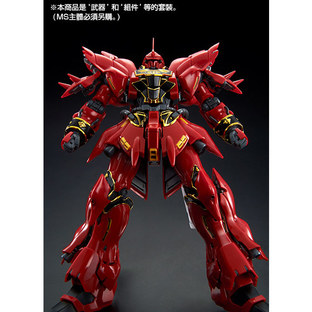 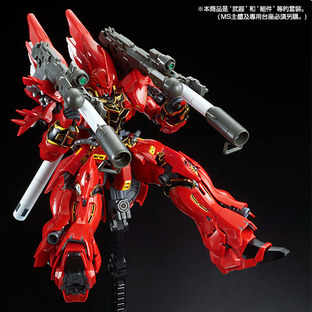 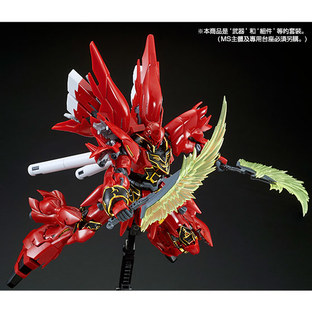 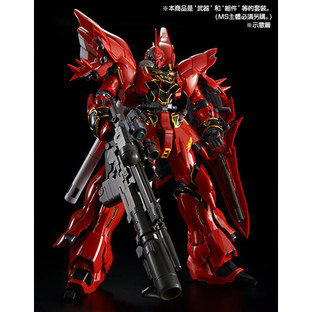 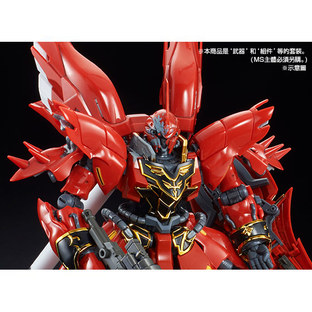 This product has a limited production run.

When the number produced has been reached, we will stop accepting applications for reservations. Thank you for your understanding.

This product is a set of “weapons” and “parts” used in order to recreate various scenes of the show by combining them with the “RG 1/144 Sinanju” (sold separately )which is scheduled to be available in stores in August 2016.

※ The Mobile Suit itself is not included in the product.
※ To reproduce the published pictures, this product and the "RG 1/144 Sinanju" (sold separately) are required.

※ The Mobile Suit itself is not included in this product.
5 types of items and parts to enjoy the RG 1/144 Sinanju even more have arrived in an expansion set!
You can recreate numerous impressive scenes!!
＜Set Content＞
● Rocket Bazooka × 2
● Effect parts for Beam Axe × 2
● Damaged head part
● Commander Daguza figure
● Hand parts (grip hand) × 1 for each left and right
◆◆ Rocket Bazooka
Recreating in a new design the Rocket Bazooka, a shooting weapon especially made for the Sinanju, with details conform to RG standards!
It is equipped with stretchable and combinable gimmicks, and jointing with Beam Rifle and shield is possible. Including the 2 impressive bazookas used in the scene when it is making its appearance later in the story.
・Reproducing the settings in the show, Rocket Bazookas are equipped with gun barrels featuring stretchable gimmicks which are useful during the carrying out of operations and when other weapons are mounted. It is possible to mount them on the Beam Rifle and the shield.
・On the back surface of the shield, it is possible to carry Rocket Bazooka and Beam Axe at the same time.
It includes a special joint for Rocket Bazooka allowing you to have a shooting pose with items equipped on the shield.
◆◆ Effect parts for Beam Axe
Including 2 effect parts having a different shape than those included in the product version.
Reproducing beam rays of the sword based on the image of the impressive scene when Beam Naginata linked to Beam Axe is rotating as in the TV opening video, etc.
・A shape having a movement that allows you to feel even more the nuance of a rotation made using Beam Naginata.
Apart from the jointing with the same type of 2 axes included in this product, it is also possible to obtain a display combining effects parts having a different shape than those included in the product version.
◆◆ Damaged Head Part
Recreating the impressive damaged head part as in the show scene. Realistic reproduction from the external side of the damaged head up to internal mechanisms.
It is included with compatible specifications not requiring a recombination with the normal head part, and according to the scene, it is possible to replace the head part.
◆◆  Figure
A same scale figure that reproduces Commander Daguza saluting. It is possible to recreate the famous scenes of the show.
◆◆ Hand Parts
Gripping hands hand parts (left and right), enlarging the range of posing, such as the reproduction of take-off scenes taking place in the middle of the story, etc.
◆ Including realistic decals supporting weapons, etc.
※ The Beam Rifle for mounting on Rocket Bazooka is included on the Mobile Suit product side.
※ The RG Sinanju used in diorama etc. is painted. (Parts attached to the collar are not included.)
※ The figure used in diorama etc. is painted.(The included figure has monochromatic molding.)
※ Hand armor is using parts from the Mobile Suit (sold separately).
—————————————————————————————————
This product is a set of “weapons” and “parts” used in order to recreate various scenes of the show by combining them with the “RG 1/144 Sinanju” (sold separately )which is scheduled to be available in stores in August 2016.
※ The Mobile Suit itself is not included in the product.
※ To reproduce the published pictures, this product and the "RG 1/144 Sinanju" (sold separately) are required.
※ The "RG 1/144 Sinanju" (sold separately) is not scheduled to be on sale at "PREMIUM BANDAI".